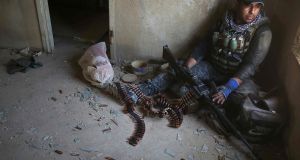 A fighter from Iraq’s elite Counter-Terrorism Service takes a position inside a building in the Shuhada neighbourhood of west Mosul on Friday. Photograph: Ahmad al-Rubaye/AFP/Getty Images

At a field clinic near the front line in Mosul, an Iraqi Federal Police officer lies in discomfort on a stretcher, a drip in his arm and bandage plastered over his chest from where shrapnel from a mortar shell had pierced his chest.

The blast which wounded the 23-year-old, Jaafar Kareem, and two comrades, was in an area where rapid advances against Islamic State earlier in the week have slowed as the militants aim mortar and sniper fire at Iraqi troops.

At least 10 shells had landed there that morning, before hitting their target, Kareem says.

“There have been a lot of our guys wounded today in the same area,” he adds, turning his head gingerly to watch an officer on the next stretcher being treated for a leg injury.

The makeshift clinic, an abandoned house manned by American volunteers and Iraqi military medics, was regularly treating members of Iraq’s security forces rushed back from the front line on Thursday in ambulances or armoured vehicles.

“We’ve already had around 20 people come in for treatment – about 70 per cent civilian, but it’s been more military [casualties] up until today,” says Kathy Bequary, director of NYC Medics, the organisation running the clinic.

Casualties her team have witnessed recently range from superficial wounds to the occasional patient dead on arrival, including one soldier with eight bullet wounds to his torso, she says.

As Iraqi forces fight militants from Islamic State, also known as Isis, deeper into western Mosul, they face increasingly stiff resistance, with the jihadists using mortar and sniper fire to try to hold off a US-backed offensive to drive them out of their last major stronghold in the country.

The fight has taken its toll of dead and wounded on Iraqi soldiers, special forces and police units. The military has not published the number of its own casualties.

Islamic State’s tactics, which include taking cover among the civilian population, have also slowed advances in some areas, the closer the battle gets to the more crowded city centre.

The area where Kareem and his comrades were hit was no more than a few hundred metres from the front line, in an area housing the Nineveh provincial government headquarters, a territorial gain trumpeted by the Iraqi military on Tuesday.

Iraqi forces have indeed made progress there. A wide main road leading to the governorate building was firmly under Federal Police control on Thursday, a Reuters correspondent visiting with elite interior ministry units said.

Armoured vehicles drove past destruction left by fighting in the former provincial government hub: a collapsed police headquarters dynamited by militants as they retreated, and a large, faded advertisement panel for “Iraqi Airways – Mosul booking office”.

But the front line had been static since early in the week, members of the Rapid Response units said.

Troops on foot had to dash between the more exposed streets for fear of sniper fire.

The whoosh of an incoming mortar shell sent them scrambling for cover against the wall of a building. It landed close enough to feel shockwaves from the blast.

“It’s been a little difficult, recently,” Ali Sattar, a 20-year-old in the Rapid Response says.

“We’ve not really advanced for three days now. Two of our teams went further forward, on a sort of recce mission, and raised the Iraqi flag on top of a tall hotel that [Islamic State] snipers have been using, then came back.”

Federal Police units were now in control of the Mosul museum, a little further forward, but any new advances were being made difficult by snipers who had taken up positions in the Assyria Hotel, less than 200m away, he says.

“The flag will probably be taken down again by the militants,” he says, half joking.

Back at the clinic, the wounded Kareem looks weary.

“The battles have been hard,” he says, sighing.