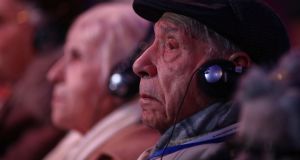 A Holocaust survivor at the former Auschwitz II-Birkenau camp during ceremonies marking the 75th anniversary of the liberation of the former Nazi-German concentration and extermination camp. Photograph: Lukasz Gagulski

Survivors of Auschwitz-Birkenau have urged the world to take a zero-tolerance approach to rising anti-Semitism and to begin educating their children earlier about the Holocaust.

In a ceremony at the former Nazi death camp, 60km west of Krakow, some 50 heads of state and government – including President Michael D Higgins – paid their respects to the 1.3 million people murdered at the most notorious Nazi death camp, and to survivors liberated 75 years ago by the Red Army.

“The great strength of the solemn occasion came from the statements of the survivors and their common theme, that it must never happen again,” said Mr Higgins after the ceremony. “Another powerful message was the call not to be indifferent so as not to repeat the 1930s when nations looked the other way.”

Many elderly survivors attending the ceremony donned blue-and-white striped caps and scarves symbolic of the uniforms they wore at the camp.

Polish survivor Marian Turski told those gathered – and a worldwide television audience – that his lesson from Auschwitz was the terrible potential cost of human apathy. “Do not be indifferent when any power or government infringes on extant social rights and do not be indifferent,” he said.

Bathseva Dagan, a Polish-Israeli Holocaust survivor and educator, suggested it was too late to begin teaching children in their teens about the mass murder of six million European Jews.

“Children grow up playing with those iPhones and they know more than we would like them to know. For that reason, this subject needs to be taught as early as possible.”

Auschwitz-Birkenau museum director Piotr Cywinski warned of exploiting the memory of the death camp and its dead for superficial outbursts of short-term emotion.

“How can one say ‘never again’,” he asked, “while looking in the eye Jews attacked on the streets today?”

Polish president Andrzej Duda said his country, which lost three million citizens to Nazi aggression, would renew its obligation to keep alive the memory of crimes perpetrated on its soil during the Nazi occupation.

“Distorting history of the second World War, denying the crimes of genocide and the Holocaust as well as instrumentalising Auschwitz to attain any goal is tantamount to desecration of the victims whose ashes lie scattered here,” he said, a nod to Warsaw’s clash with Moscow over the war’s origins which has hung over this anniversary.