EU and UK negotiators on Friday talked up prospects of agreeing a Brexit deal this autumn but remain as far apart as ever on the Irish Border backstop. Video: Reuters 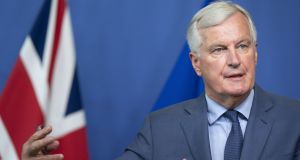 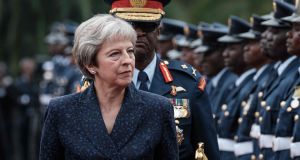 Theresa May reviews a military guard of honour at the State House in Nairobi on August 30th. Photograph: Asuyoshi Chiba/AFP/Getty Images

The EU’s chief Brexit negotiator has said he is “strongly opposed” to key parts of Theresa May’s proposals for a post-withdrawal trade deal.

He told German newspaper Frankfurter Allgemeine Zeitung: “We have a coherent market for goods, services, capital and people — our own ecosystem that has grown over decades. You cannot play with it by picking pieces.

“There is another reason why I strongly oppose the British proposal. There are services in every product. In your mobile phone, for example, it is 20 to 40 per cent of the total value.”

Mr Barnier also told EU car manufacturers they would have to use fewer British parts after Brexit in order to keep to tariff export rules.

The comments came as former Brexit secretary David Davis branded Ms May’s Chequers blueprint as being “actually almost worse than being in” the EU.

Mr Davis poured scorn on Ms May’s claim that she would not be “pushed into accepting compromises on the Chequers proposals that are not in our national interest” as that risked becoming an “an incredible open sesame to all”.

He told BBC One’s The Andrew Marr Show: “In my view, the Chequers proposal ... is actually almost worse than being in.

“We will be under the rule of the EU with respect to all of our manufactured goods and agri-foods, that’s a really serious concession, what about take back control, it doesn’t work?

“That actually leaves us in a position where they dictate our future rules without us having a say at all, so it’s a worse deal.”

Earlier on Sunday Ms May said she would not compromise with Brussels over her plans for Brexit as a media report said rivals in her party were set to publish their own proposal calling for a cleaner break with the European Union.

With under two months before Britain and the EU want to agree a deal to end over 40 years of union, Ms May is struggling to sell what she calls her business-friendly Brexit to her own party and across a divided country.

“I will not be pushed into accepting compromises on the Chequers proposals that are not in our national interest,” Ms May wrote in the Sunday Telegraph newspaper. “The coming months will be critical in shaping the future of our country and I am clear about my mission.”

She also said she would not hold a second referendum on Britain’s EU membership, reiterating a long-held position in an attempt to counter increasingly vocal campaigning for another public vote on the terms of the divorce.

“To ask the question all over again would be a gross betrayal of our democracy,” Ms May said.

In another sign of cabinet tensions, international development secretary Liam Fox took a swipe at the treasury over gloomy predictions on the consequences of a no-deal scenario.

He told the BBC: “Can you think back in all your time in politics where the Treasury have made predictions that were correct 15 years out, I can’t, they didn’t predict the financial crisis that happened, no-one could.

“So this idea that we can predict what our borrowing would be 15 years in advance is just a bit hard to swallow.

“To say what a GDP figure would be 15 years ahead is not a predictive power that I’ve known the Treasury to have in my time in politics ... I don’t believe it is possible to have a 15-year time horizon on predictions on GDP.”

Referring to EU trade rules, Mr Barnier said: “Outside of the internal market and the customs union, this involves customs formalities and controls that hinder ‘just in time’ production.

“In order for EU carmakers to benefit from the tariff benefits of the EU-Korea agreement, only a certain proportion of the services may be provided in a car in a third country.

“Businesses have to be careful not to use too many parts from Britain in their vehicles in the future.”

He added: “By the way, the British have a choice. They could stay in the single market, like Norway, which is also not a member of the EU — but they would then have to take over all the associated rules and contributions to European solidarity. It is their choice.

“But if we let the British pick the raisins out of our rules, that would have serious consequences. Then all sorts of other third countries could insist that we offer them the same benefits. That would be the end of the single market and the European project.” - PA