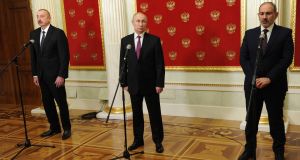 Russian president Vladimir Putin has hailed a Moscow-brokered peace deal for Nagorno-Karabakh as crucial to security and economic development in the south Caucasus, but Armenia said its conflict with Azerbaijan over the region was still “unresolved”.

The Russian leader hosted Mr Pashinyan and Azeri president Ilham Aliyev on Monday for their first meeting since the fighting. After almost four hours of talks, they announced the creation of a working group led by their countries’ deputy premiers to plan transport and infrastructure projects that could boost trade and investment in the strategic south Caucasus.

Mr Putin said they had agreed that the November 9th ceasefire deal was “generally being respected and no major incidents have been reported. The Russian peacekeeping force is fully meeting its obligations to both sides. More than 48,000 displaced persons and refugees have already returned to Nagorno-Karabakh ... [and] work is under way to restore infrastructure, energy, residential buildings”.

Agreements reached on Monday would lead to “concrete plans for the development of transport infrastructure and the region’s economy” which would “benefit the Armenian and Azerbaijani people and, without any doubt, the region as a whole, and hence the interests of the Russian Federation,” Mr Putin added.

Fighting that erupted last September led to Azerbaijan making major battlefield gains that were cemented by the November ceasefire deal, which returned much of Nagorno-Karabakh and surrounding districts to Baku’s control, more than 25 years after the region was seized by its ethnic Armenian majority.

Turkey fully backed Azerbaijan’s military offensive, dramatically boosting its profile in the south Caucasus, but Russia has retained its key role in the region by deploying peacekeepers and brokering not only the truce but talks on long-term economic development.

Mr Aliyev said “the Nagorno-Karabakh conflict is now in the past, and we must think about the future: how to live together in the region, how to unblock transport routes and strengthen regional stability and security in the future”.

While Azerbaijan celebrated recent events, Mr Pashinyan’s handling of the conflict plunged Armenia into political crisis, and he has faced street protests, calls to step down and an alleged assassination plot.

“Unfortunately, this conflict remains unresolved. Of course, we managed to secure a ceasefire, but there are still a lot of issues to be resolved. One of these issues is the status of Nagorno-Karabakh,” he said.

Mr Pashinyan insisted that Armenia was ready to continue talks on the issue mediated by Russia, France and the United States, and wanted urgently to resolve “the most sensitive and painful issue” of bringing home prisoners of war from Azerbaijan.