New Year's Eve celebrations in cities around the world brought us in to 2017. 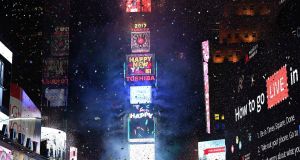 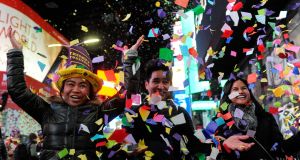 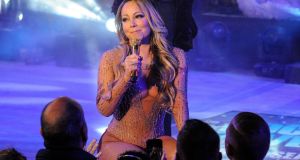 Revelers embrace at the start of 2017 at the New Year’s celebration in Times Square. Photograph: Reuters 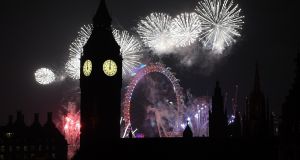 Fireworks light up the London skyline and Big Ben just after midnight on January 1st, in London, England. Photograph: Getty 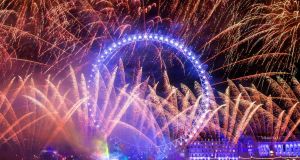 Fireworks light up the sky over the London Eye in central London during the New Year celebrations. Photograph: PA 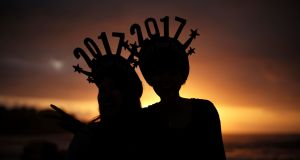 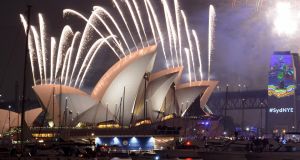 New Year’s celebrations across the world have ushered in 2017 with dazzling fireworks displays and crowded streets amid tightened security measures for the festivities.

There was a huge police presence on the streets of London as spectators from nearly 100 countries flocked to the Thames to watch the night sky light up as Big Ben struck midnight.

With memories of the lethal Berlin lorry truck attack still fresh, London mayor Sadiq Khan assured crowds the capital was “as safe as it possibly can be”.

After the event passed successfully, he hailed it as demonstrating to the world that London “is open to all”.

In Scotland, Hogmanay celebrations were expected to attract a crowd of up to 80,000 people to Edinburgh for the sold-out, world-famous event, described as the UK’s largest outdoor winter festival.

But the dazzling scenes in much of the world posed as a stark contrast to an atrocity in Istanbul, Turkey, where at least 35 were killed in a gun attack on a nightclub.

The New Year arrived in New York at 5am (Irish time) as hundreds of thousands of merrymakers witnessed the descent of the kaleidoscopic New Year’s Eve ball in Times Square at midnight on Sunday, celebrating a century-old New York tradition under an unprecedented umbrella of security.

As many as 2 million people, surrounded by a ring of 40-ton sand trucks and some 7,000 police, gathered in the “Crossroads of the World” to watch the glittering sphere complete its minute-long drop, marking the beginning of 2017.

With the throng counting down the seconds, the crystal-paned ball slid with smooth precision down its pole, mounted on a tower at the head of the plaza. At the stroke of midnight, it touched home, illuminating a giant “2017” sign and sending a shower of fireworks into the sky.

The sights and sounds were experienced by a veritable sea of humanity, sectioned off in block after block of temporary corrals set up to better control the crowd. Millions of others around the world watched the spectacle on television and the internet. 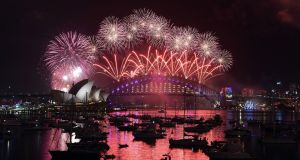 Despite the heavy police presence, or perhaps because of it, thousands of people, many from overseas, arrived early to be dazzled by the flashing signage and entertained by live musical performances by Mariah Carey, Thomas Rhett and Gloria Estefan.

In the days before the celebration, city and federal officials said they were not aware of any credible threats, and in the event, the party went off without a hitch. But authorities also said they were taking no chances.

A protective perimeter of 65 hulking sanitation trucks filled with sand, as well as about 100 other smaller vehicles, encircled the Times Square area. Placed in strategic positions, the “blockers” are intended to prevent a repetition of the truck attacks in Berlin and Nice earlier this year, officials said.

Coast Guard and police vessels patrolled waterways around Manhattan. US defence and security agencies said they believed the threat of militant attacks inside the United States was low during the New Year’s holiday, though the possibility of an attack, no matter how remote, was always present, they said.

Cities in the Pacific island nations of Samoa, Tonga and Kiribati were among the first to bid farewell to 2016, before fireworks were launched from the top of Auckland’s Sky Tower.

Two pyrotechnic shows followed at Sydney Harbour and doused Australia’s iconic bridge in the bright light of an estimated seven tonnes of fireworks.

The city’s display also saw Sydney Harbour Bridge turned purple in a tribute to Prince, while David Bowie was honoured with space-themed visuals in a nod to the late star’s hit, Space Oddity.

Meanwhile, red starbursts exploded above the Kremlin for the Russian occasion, which marks the country’s major gift-giving holiday.

In Europe, fireworks in Helsinki also signified the beginning of the centenary year of Finnish independence.

Mr Khan said the “dazzling display” was “celebrated safely and in style” thanks to the work of the emergency services.

“People came from all over the world to kick off the New Year in our great city and our world-renowned fireworks display was broadcast around the globe, delivering the message, once more, that London is open to all,” he added.

Around 3,000 officers were on duty within and outside ticketed areas in London, while armed police were also set to be a fixture on the capital’s Tube trains as they travel between jobs in a move aimed at reassuring passengers.

Fears of a mass-casualty terror plot targeting one of the country’s New Year events heightened after lorries were used in devastating attacks on crowded areas in Nice and the German capital.