Amsterdam to apologise for role in slave trade 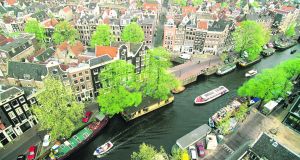 Amsterdam: many of the grandest buildings in the centre of the city have an association with slavery.

In what’s being hailed as a “historic” decision, Amsterdam is to apologise for its role in the slave trade which made it the richest city in the western world for more than 100 years from the mid-17th to mid-18th centuries – creating wealth that remains visible today.

A swing to GreenLeft in local elections last year, making it the largest party on the city council with 10 seats, meant that for the first time on Monday evening, parties favouring an apology were able to achieve a left-leaning majority of 31 of the 45 seats, putting the decision beyond doubt.

GreenLeft was joined by Labour, D66, the Socialists, Bij1, and Think, but also by the Christian Union, which is conservative on issues such as same-sex marriage, abortion and euthanasia. Its leader on the council, Don Ceder, commented after the vote: “This should have happened much sooner”.

Those voting in favour did not include prime minister, Mark Rutte’s centre-right Liberals, their frequent allies, the Christian Democrats, or Thierry Baudet’s fledgling Forum for Democracy, all right-of-centre parties.

The plan now is for the council to spend the next year researching the city’s slave-owning past, before making the public apology at its annual commemoration of slavery, a festival known as Keti Koti (The Chain is Broken) or Prisiri Maspasi (Festival of Emancipation) on July 1st, 2020.

July 1st is significant because it marks emancipation day in the Caribbean country of Suriname, a Dutch colony until independence in 1975.

Suriname – along with the Dutch Antilles and the island of Aruba – was where the company behind the slave trade, the Dutch West India Company, founded in 1621 and financed by Amsterdam’s bankers, shipped more than 600,000 Africans to work on plantations producing sugar and coffee.

Records from the 17th century show that 30 of the city’s most prominent merchants were the main drivers behind Dutch slavery, which they developed to a new mass scale. These were men often associated with the magnificent canal houses of the inner city, built to display their wealth.

In fact, many of the grandest buildings in the centre of the city have that unfortunate association with slavery, including the Royal Palace on the Dam, where the plantation owners of Suriname met regularly, and West India House, former headquarters of the West India Company.

It was during this “golden age” that the Amsterdam stock exchange was established to provide those merchants with a safe and regulated place where they could buy and sell shares in these early globalised enterprises. It is still the oldest functioning stock exchange in the world.

“Even though slavery has been abolished since 1863, the traces remain visible everywhere around the city today,” said D66 councillor Dehlia Timman.

“This vote is a historic moment. I hope it can end a period which has been very painful for the descendants of slaves, many of whom came to the Netherlands and have been instrumental in shaping our multicultural society. Their history must not be forgotten.”