Controversial changes to poster campaign ahead of annual event 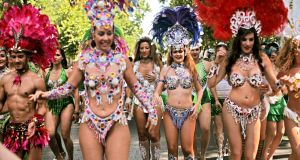 Dancers in Madrid during the 2018 Gay Pride parade. The Madrid government is being accused of censoring pro-LGBT publicity ahead of this year’s festivities. Photograph: Mario Roldan/via Getty Images

The new right-wing government of Madrid is being accused of censoring pro-LGBT publicity ahead of the city’s Gay Pride festivities.

The Madrid Gay Pride, which takes place during the first weekend of July, is one of the biggest such events in Europe. However, the leftist opposition in the capital claims that a campaign advertising the event and celebrating LGBT history has been whitewashed.

This year is the 50th anniversary of the Stonewall riots in New York, a major landmark in the campaign for gay rights. In Spain, meanwhile, the LGBT community has made huge strides in terms of rights and visibility since the end of the country’s dictatorship in the late 1970s. Under Manuela Carmena, who took office as mayor in 2015, the Más Madrid leftist coalition heavily promoted the Gay Pride event and LGBT rights.

The Carmena administration had designed a series of banners for this year’s festivities making reference to advances the LGBT community has made in recent decades.

However, a new local government led by the conservative Popular Party (PP) has replaced that of Carmena following local elections in May. Más Madrid says that the new administration has eliminated from the Gay Pride publicity the messages that harked back to the past campaign for gay rights. Instead, a blanket slogan has been used: “Our greatest pride.”

“I think it’s indecent to censor messages that refer back to the achievements of those people, and the memory of those people, who have allowed us to enjoy the rights which, 30 years ago, were unthinkable,” said Rita Maestre, spokeswoman for Más Madrid.

City hall played down the changes, saying the only banners that had been modified were ones that hung from lamp posts across the city.

City hall’s position on the issue has been widely attributed to the far-right Vox party, which entered a governing partnership with the PP and Ciudadanos and which has expressed hostility to the Gay Pride celebrations. During the recent election campaign, Vox called for the event to be moved from central Madrid to a park several miles away.

This week, Vox has criticised PP mayor José Luis Martínez-Almeida for promising to hang the rainbow-coloured LGBT flag from city hall during the festivities, as has become traditional.

“If Almeida wants to show that Madrid respects the rights of everyone, regardless of their sexual orientation, then he should hang the Spanish flag, which is everybody’s, not that of a lobby which hates anyone who thinks differently to it,” Vox said in a Twitter post.

The disagreement over the Gay Pride event added to existing tensions between Vox and the PP in Madrid city hall. On Tuesday the far-right party walked out on the new local government because, it said, the PP had not honoured an agreement to give it a certain number of posts.

Vox also broke off talks with the PP aimed at forming new right-wing administrations in the Madrid and Murcia regions.