Can Boris Johnson dig the UK out of the hole it is in? Don’t count on it 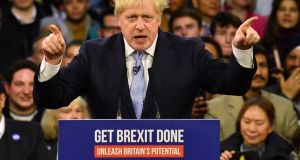 Coronavirus meant that the end of the transition was always going to be a subdued affair, with the chimes of Big Ben sounding across deserted streets around Westminster at 11pm on New Year’s Eve. But after 4½ years of bitter argument, both sides in the Brexit debate were also so exhausted that they felt relieved or resigned rather than euphoric or angry.

“We have sustained a total and unmitigated defeat,” arch-Remainer Andrew Adonis told the House of Lords on Wednesday, quoting Winston Churchill after the Munich agreement. Boris Johnson tried to cheer up the country in a morale-boosting New Year’s Day column in the Daily Telegraph, but his celebration of the UK’s exit from the EU was notably unemphatic. “It means the end of that uneasy feeling that we were constantly being asked to sign up for the details of a project – a giant federal fusion of states – in which we didn’t really believe and hadn’t really bargained for,” he wrote.

Johnson has been vague about how he proposes to use Britain’s newly restored freedoms, partly perhaps because they are circumscribed by his trade and co-operation agreement with the EU. The deal allows Britain to diverge from EU regulatory standards and from its commitments to fair competition, but at the risk of retaliatory sanctions on British exports. In some circumstances, the EU can impose sanctions within 19 days of “significant divergences” in standards arising that lead to “a material impact on trade or investment”.

So the deal effectively cuts off one potential course for the British economy favoured by some Brexiteers: a bonfire of regulations leading to the creation of Singapore-on-Thames. Such a course is, in any case, impossible for Johnson if he wants to hold together the electoral coalition that voted for Brexit and gave him his 80-seat majority a year ago.

The City of London will lose some business to other European financial centres but its history of innovation, adaptability and resilience suggests that it will retain its dominant position

Former Conservative minister David Willetts has called this alliance of older, conservative, middle-class voters and the unskilled and semi-skilled working class a coalition of the excluded and the insulated. This alliance of voters agrees about Brexit, patriotism and culture wars over issues such as statues and transgender rights. Many of the older, middle-class voters are retired or close to retirement, and large parts of the “excluded” never felt they were participating in the economy even when it was growing.

This leaves Johnson dependent on an electoral coalition in which active participants in the economy are under-represented and that is resistant to measures which prioritise the young over the old. Thus, the Conservatives have been unable to escape from a “triple lock” that ensures that pensions increase in line with three measures of inflation. And the government last month retreated from planning reforms that would have made it easier to build more homes after backbenchers from the shires rebelled.

Voters in the Red Wall of formerly Labour-supporting constituencies in the midlands and northeast of England want the prime minister to make good on his promise to “level up” economic development. He has committed to creating a ribbon of freeports across the country but most economists believe these enterprise zones will simply shift investment and economic activity from one place to another.

Johnson has hailed the Oxford/AstraZeneca coronavirus vaccine as an exemplary collaboration between state activism and free market capitalism. The departure of Dominic Cummings has seen Downing Street rein in some of its ambitions to use the state to create new British technology giants. But Britain remains very strong in areas such as financial technology (fintech), artificial intelligence and biomedical research, and Brexit could offer some regulatory advantages in these sectors. The City of London will lose some business to other European financial centres but its history of innovation, adaptability and resilience suggests that it will retain its dominant position alongside New York.

Tackling Britain’s underlying economic problems of low productivity, poor skills and inequality require long-term strategies and sustained investment and policy focus. But although Johnson is only one year into a possible five-year term, the electoral clock is ticking and his first major test will come in May. His decision to postpone last year’s local elections means that May’s will be the biggest ever and they will coincide with parliamentary elections in Scotland and Wales.

The English elections will demonstrate whether voters are willing to forgive the government for its handling of coronavirus, and if Keir Starmer can restore Labour’s fortunes. But it is Scotland’s elections that could be the most consequential for Johnson’s political destiny and the future of the United Kingdom itself.

First minister Nicola Sturgeon is campaigning for a mandate to call a second referendum on Scottish independence as all recent polls show a clear majority in favour of leaving the UK. Johnson has ruled out agreeing to a second vote even if Sturgeon wins a majority, and Starmer is backing him in that stance. But if Westminster repeatedly refuses Scottish demands to determine its constitutional future, support for independence is likely to grow. Johnson is offering no alternative to independence beyond the status quo, and although Starmer is setting up a constitutional convention, there is no evidence that Labour is ready to embrace a radical federalisation of the British state that would see the end of parliamentary supremacy in Westminster.

Britain will this year chair the G7 group of industrialised nations and the COP-26 climate change summit, and Johnson hopes to use both as platforms for the country’s international convening power. He also hopes that his hawkish approach to China will ingratiate him with the new administration in Washington, particularly given the EU’s decision to sign an investment treaty with Beijing, which has antagonised the Biden team.

Britain’s early approval of two coronavirus vaccines has allowed it to vaccinate a million people before other European countries have properly begun. If it can further pick up the pace of vaccination, Britain could escape from coronavirus restrictions a little earlier than its neighbours, giving the economy and national confidence a boost. But Britain’s success after Brexit is more likely to depend on how it remedies its underlying economic weaknesses and responds to calls for independence from Scotland. Both require the kind of wise, determined and imaginative leadership that Johnson has until now failed to demonstrate.