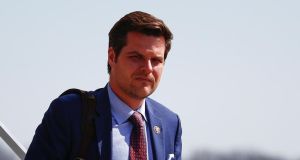 Florida congressman Matt Gaetz descends from Air Force One following a trip from Florida, at Joint Base Andrews in Morningside, Maryland, US on March 9th. Photograph: Tom Brenner/Reuters

US stock markets plunged on Monday amid fears over coronavirus and falling oil prices, as president Donald Trump faced mounting criticism because of his response to the virus, also known as Covid-19.

The market rout came as at least four members of Congress announced they were self-quarantining after it emerged they had contact with an attendee at the Conservative Political Action Conference (CPAC), which concluded 10 days ago. Mr Trump and vice president Mike Pence also attended the event which took place outside Washington.

One of the impacted congress members – Matt Gaetz of Florida – travelled on Air Force One on Monday afternoon with Mr Trump, who had attended a fundraiser in Orlando. Less than an hour after stepping off the presidential plane in Washington, Mr Gaetz announced he was taking precautionary measures over virus fears. He reportedly learned he had been in touch with an infected person shortly after boarding the plane.

Congressman Doug Collins, who toured the Centre for Disease Control and Prevention with Mr Trump on Friday, also announced yesterday he was self-quarantining.

Late on Monday, there were no plans to cancel this week’s St Patrick’s Day events in Washington. House Speaker Nancy Pelosi was due to meet with committee chairs last night on Capitol Hill.

Though most public events were continuing in the United States – including a major Joe Biden rally in Detroit last night ahead of today’s primary contests in Michigan and five other states – there was a growing sense of unease across the country.

US stock markets ended the day deep in negative territory, with the Dow Jones Industrial Average slipping by 2,000 points – its biggest point drop in history.

Markets in New York were suspended for 15 minutes shortly after the opening bell – the result of a precautionary circuit breaker that is triggered in the event of a severe market decline – but the volatility continued throughout the day.

The Irish stock market lost €6.6 billion in value – bringing its losses over 11 days of trading to €22.7 billion.

Dublin’s Iseq dropped 6.4 per cent in an international markets session that was described as “Black Monday”, with the number of coronavirus cases globally reaching 110,000.

European markets closed before the announcement by the Italian prime minister Giuseppe Conte that the country’s strict quarantine measures would be extended to all of Italy.

European companies have lost €2.6 trillion in value since fears of the economic damage from the epidemic sparked a worldwide sell-off last month.