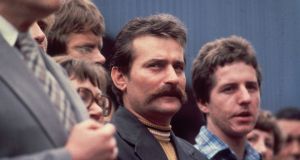 The massive museum looks like a rusting ship’s hull and could be distant cousin of its sleeker Belfast equivalent. The Titanic Museum recalls a ship that sank on its maiden voyage. But the metaphorical ship of Solidarity, launched here in Gdansk in 1980, proved unsinkable.

Europe is gearing up for the 30th anniversary of the fall of the Berlin Wall on November 9th 1989, and the peaceful revolution that reshaped the continent.

The perfect place to start the journey is the extraordinary European Solidarity Centre (ECS). It is a fitting tribute to how and where everything started: in Poland’s beautiful Baltic port city and the brave members of the Solidarnosc (Solidarity) trade union, founded in Gdansk’s Lenin Shipyard.

The museum’s audio guide, in its first minute, urges visitors to “find out about history and decide about the future”. But a political battle over history now grips Poland’s proudest memory.

Visitors entering the exhibition are plunged into an atmospheric recreation of the nearby shipyard halls with key objects.

That prompted a strike and the second key exhibit: plywood panels displaying 21 hand-written worker demands, including: free trade unions; the legal right to strike; and an end to the repression of independent activists.

The third object: a yellow pickup, the kind of which was used by Lech Walesa, a shipyard electrician with handlebar moustache, as a mobile stage to win public backing.

Facing unprecedented worker fury, Warsaw’s socialist government recognised Solidarity as the Soviet bloc’s first trade union. Its membership grew to 10 million in its first year – a sensation in a country of 36 million – and the organisation challenged the fiction that the People’s Republic represented the workers.

The struggle arose after Socialist leaders’ post-war promises yielded to falling living standards and growing oppression. A workers’ revolt in 1970 was put down violently by the army, with at least 42 fatalities.

One was a 20-year-old shipyard worker Ludwik Piernicki; his bullet-ridden leather jacket hangs in the museum beside police mugshots of Polish protesters: workers, students and pensioners. Their gazes – from fearful to defiant – remind us of the many faces of Polish anti-regime protest.

Warsaw tried everything to tame Solidarity – imposed martial law in 1981, suppressed the organisation and interned its leaders. But by 1989 the game was up.

With Moscow no longer watching the back of its Polish satellite, intimidation was off the table. A disastrous economic outlook in the spring of 1989 prompted Polish officials to stage round table talks from February to April. Semi-free elections followed in June. Around the Soviet bloc, the transition to democracy was under way.

This triumph brought Walesa world fame, the 1983 Nobel Peace Prize and democratic Poland’s presidency. But now Walesa, a complex and often infuriating figure, and the Solidarity legacy are under attack from Jaroslaw Kaczynski.

He was a fringe Solidarity figure in the 1980s but is now Poland’s de facto leader as head of the ruling Law and Justice (PiS) party. Since winning the 2015 election, PiS has overhauled Poland’s courts, public television and public prosecutor to free them of what the party sees as encrusted crony structures.

Critics dismiss that, saying the reforms are about bringing public institutions under direct PiS control.

But now the restless Kaczynski wants more: to recast modern Poland’s founding Solidarity myth. How? By denigrating Walesa’s negotiated transition to democracy as a lazy compromise that allowed communist figures to cling to power and influence, at the expense of ordinary Poles who feel they have been left out of the neo-liberal transition.

For them, PiS has an alternative founding myth ready: the Smolensk air disaster of 2010 that claimed the life of 96 people including the PiS leader’s twin brother, president Lech Kaczynski.

With him on board the plane were senior state officials and key public figures – including Solidarity’s founding mother, Anna Walentynowicz.

Inquires dubbed the crash an accident but the surviving Kaczynski has constructed a counter-narrative about how the plane was shot down by Russians, in cahoots with his political rivals. But for his Smonlensk legend to take off, with his late brother and Mrs Walentynowicz as its new founding figures, the Gdansk Solidarity museum needs to be brought to heel.

Poland’s government cut funding for the centre by almost half, arguing its educational programme and facilities for NGOs are overtly political. Centre officials suggest the problem is more that their work doesn’t slavishly reflect PiS political interests.

“Rather than a wider understanding of civil society, the government’s attitude is ‘because we’re funding it the most, we should be able to control it’,” Kacper Dziekan of the ECS says.

He says the ECS sees its mission as adapting the Solidarity message for the 21st century. But its vision for a progressive, inclusive and liberal Poland are in conflict with the PiS vision: conservative, nationalist, patriotic.

But the PiS funding cut backfired: furious Poles launched a crowd-funding campaign that more than replaced the funding gap. And now even old Solidarity legends have come back to do battle.

Bogdan Borusewicz organised the original shipyard strikes, was interned and lived for years in the 1980s Polish underground. In his office in the Polish senate in Warsaw, he is magnanimous about how, as a result, much attention – and credit – shifted to Lech Walesa.

“I pushed and Walesa pulled,” he jokes. “But from beginning to the end I was in the eye of the cyclone, me and a lot of people.”

Unlike Walesa and Kaczynski, he stayed away from the 1989 round table talks and criticised the transition timetable as rushed. But today Borusewicz defends Walesa and describes as “scandalous” PiS attempts to delegitimise the past.

“Counterfactual history is not history,” the 70-year-old historian turned politician says, insisting the facts of the Solidarity revolution are not up for discussion.

“PiS should have waited longer until we are all dead and then try to change the historical narrative. The problem is that Jaroslaw Kaczynski is my age so he can’t wait any longer.”

1 ‘Summer is not lost’ – Taoiseach announces accelerated easing of coronavirus restrictions
2 California police fatally shoot 22-year-old man on knees with hands up
3 Coronavirus: People to be allowed to travel anywhere in their county from Monday
4 Covid-19 restrictions: What you still can’t do this weekend
5 Coronavirus: Seven more deaths in the State and 28 new cases confirmed
Real news has value SUBSCRIBE