About 90% of those infected can survive if treated early, in boost to fight against outbreak 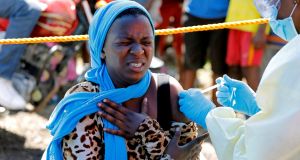 A young woman reacts as a health worker injects her with the Ebola vaccine, in Goma, Democratic Republic of Congo, on August 5th. Photograph: Baz Ratner/Reuters

New drugs have drastically increased the chances of survival for people infected with Ebola, a hemorrhagic fever responsible for more than 12,000 deaths in Africa since 2014.

About 90 per cent of people can survive Ebola if they’re treated early, according to the latest research.

While a new vaccine, developed to protect people from contracting Ebola, has been given to 190,000 people, the latest drugs will increase the chances of survival for those who are already infected with the virus.

“From now on, we will no longer say that Ebola is incurable,” said Jean-Jacques Muyembe, director general of the Institut National de Recherche Biomedicale, one of the organisations working on the trials.

“We have in our hands more information about the safety and effectiveness of drugs to treat Ebola,” he wrote on Twitter. “We can now offer patients an even better chance of survival.”

REGN-EB3 and mAb114, the drugs found by the trials to be most effective, were developed using antibodies taken from Ebola survivors.

They are the “first drugs that, in a scientifically sound study, have clearly shown a significant diminution in mortality”, said Dr Anthony Fauci, director of the US National Institute of Allergy and Infectious Diseases (NIAID), another of the trial’s co-sponsors. He said he hoped the new drugs would make people “more enthusiastic” about coming for treatment.

“When you have something to offer an individual, it makes it much more likely that you might get to them early. And the earlier the better, as in any disease.”

The Ebola outbreak response in DRC has been badly hampered by mistrust among local communities, who are suspicious about how Ebola is spread and whether it is even real. While reporting from eastern DRC in June, The Irish Times was told numerous times by Congolese people that many think Ebola doesn’t exist, or is being spread deliberately by the government and foreigners, trying to quell opposition or profit off the crisis.

At least 152 healthcare workers have been infected with Ebola since the outbreak began. Others have been victims of attacks by local communities.

Some organisations, including the international Red Cross medical charity, have called for a “reset” of the response, saying scientific progress alone isn’t enough to stop Ebola and community engagement is key.

“We are still far from ending the Ebola outbreak,” said the Red Cross’s Corrie Gwyn Butler. “There is still a lot of work to do.”