EU to call for ‘credible’ elections in Venezuela within eight days

President Maduro’s efforts to withdraw $1.2bn in gold blocked by US, say reports 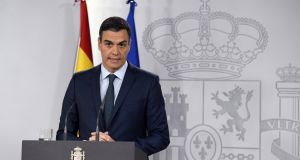 The European Union stepped up pressure on Venezuelan president Nicolas Maduro, signaling it will recognise opposition leader Juan Guaido if elections are not called within eight days.

“The EU strongly calls for the urgent holding of free, transparent and credible presidential elections in accordance with internationally democratic standards,” the bloc’s 28 governments will say according to draft of a joint statement obtained by Bloomberg.

The UK, Spain, Germany and France were among governments that on Saturday pledged to recognize Mr Guaido if elections aren’t called within eight days.

The message comes a day after efforts by Mr Maduro to withdraw $1.2 billion in gold from the Bank of England, a significant part of the nation’s $8 billion in foreign reserves, was blocked after US officials lobbied their UK counterparts, Bloomberg reported.

The US is seeking to steer Venezuela’s overseas assets to Mr Guaido to help bolster his chances of effectively taking control of the government.

European leaders are co-ordinating their responses to the Venezuelan crisis as the US takes its own call for recognition of Mr Guaido to the United Nations Security Council on Saturday. Other countries backing Guaido include Canada, Argentina, Brazil, Colombia and Panama.

“We want democracy and free elections in Venezuela, ” Spanish prime minister Sanchez said in a televised statement Saturday. “I want to state absolutely clearly that if within eight days, fair, free and transparent elections are not called in Venezuela, Spain will recognize Juan Guaido as president.”

A spokeswoman from the German government tweeted the same message shortly after the comments from Madrid and Paris.

Mr Guaido proclaimed himself interim president on Wednesday during a march of hundreds of thousands in Caracas.

The United States said on Friday it was ready to step up economic measures to drive Mr Maduro from power, and most Latin American nations have joined Washington in supporting Mr Guaido’s claim on the presidency.

Europe, however, had until now simply called for new elections in the troubled South American country.

The Venezuelan state and the military have so far remained loyal to Mr Maduro despite a deep economic and political crisis that has sparked mass emigration, with inflation forecast to rise to 10 million per cent this year.

On Saturday, Russia, China, South Africa and Equatorial Guinea blocked a US push for a UN Security Council statement expressing full support for Venezuela’s National Assembly as the country’s “only democratically elected institution.”

The move came ahead of meeting of the 15-member body on Saturday, at the request of US Secretary of State Mike Pompeo.

A protege of the late Venezuelan president Hugo Chavez, Mr Maduro won re-election in a May 2018 ballot widely seen as a charade. A Supreme Court largely loyal to Mr Maduro stripped the Assembly of its power the year before.

Mr Guaido announced on January 23rd that he would assume Mr Maduro’s authority temporarily, invoking a constitutional amendment that allows for the head of the legislature to lead a caretaker government until new elections can be held. The Assembly had already declared Mr Maduro’s rule illegitimate.

Final wording of the EU draft document is subject to changes and ongoing discussions between envoys of the EU’s 28 governments.–Bloomberg