Duterte regrets calling Obama a ‘son of a whore’ 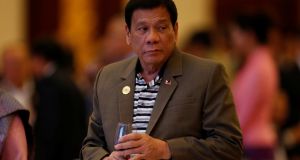 The president of the Philippines Rodrigo Duterte has expressed regret for calling Barack Obama a “son of a whore”, which prompted his US counterpart to cancel a planned meeting at the Association of Southeast Asian Nations summit in Laos.

The meeting of Asian nations was the recently inaugurated Mr Duterte’s first outing as Philippines leader and he made the remarks during a news conference shortly before flying to Laos. He became angry when asked about US criticism of the estimated 2,400 killings of suspected drug dealers and users by police and vigilantes since he came to power on June 30th.

In a statement, Mr Duterte said: “While the immediate cause was my strong comments to certain press questions that elicited concern and distress, we also regret it came across as a personal attack on the US president.”

The insult to Mr Obama has distracted from broader geopolitical issues, such as efforts by China to gain the support of the Philippines for its territorial ambitions in the South China Sea. It was Mr Duterte’s predecessor Benigno Aquino III who brought a case to an international tribunal in The Hague which found against Beijing’s actions.

Mr Obama played down the remarks, describing Mr Duterte as “a colourful character”, but he did not back away from cancelling the meeting.

The Philippine leader won an election by a landslide, largely based on his promises to take a tough approach to the narcotraffickers.

The international community has expressed outrage at the crackdown, which has seen innocent victims, including small children, caught in the crossfire.

The comment that caused Mr Obama to postpone the meeting was certainly confrontational, although some of his supporters argue that the style was simply Mr Duterte’s robust manner of speech.

He used the expression putang ina mo in Tagalog, which translates as “your mother’s a whore,” one of the harshest insults you can use in the Philippines.

He has previously used “son of a whore” to describe Pope Francis and UN secretary general Ban Ki-moon. He referred to the US ambassador to the Philippines, Philip Goldberg, as a “gay son of a whore”.

This is most likely Mr Obama’s last visit to Asia as US president, and his trip has already involved an uncomfortable diplomatic incident when he landed in Hangzhou airport in China to find the usual staircase for exiting Air Force One was not available. He had to disembark from a small staircase, and there were strong words between US and Chinese officials. While many saw the protocol breach as a snub, both the US and China have since tried to play down the significance.

Japan’s prime minister Shinzo Abe had no qualms about meeting Mr Duterte. “Mr President, you are quite a famous figure also in Japan and I’m very excited to meet you in person,” Mr Abe said as the two held talks on the sidelines of the Asean meeting.

Mr Abe also offered his condolences for the 14 victims of a bombing in Mr Duterte’s home city of Davao at the weekend.