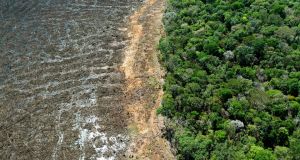 In 2020, destruction of the world’s largest rainforest rose 9.5 per cent from a year earlier to 11,088 square kilometres (2.7 million acres), according to data from Brazil’s national space research agency Inpe, seven times the size of London.

That means Brazil will miss its own target, established under a 2009 climate change law, for reducing deforestation to roughly 3,900 square kilometres. The consequences for missing the target are not laid out in the law but could leave the government open to lawsuits.

The official annual measure, known as PRODES, is taken by comparing satellite images from the end of July 2020 with those from the beginning of August 2019. These dates are chosen to coincide with the Amazon’s dry season, when there is less cloud cover to interfere with the calculations.

The Amazon is the world’s largest rainforest and its protection is crucial to stopping catastrophic climate change because of the vast amount of carbon dioxide it absorbs.

The latest annual destruction is a substantial increase from the 7,536 square kilometres that were deforested in 2018, the year before Mr Bolsonaro took office.

While environmentalists blamed the government for the rise, federal officials hailed the figures as a sign of progress in fighting deforestation, as the increase was far lower than the 34 per cent increase recorded in 2019.

“While we are not here to celebrate this, it does signify that the efforts we are making are beginning to bear fruit,” vice-president Hamilton Mourao told reporters at Inpe headquarters in the Sao Paulo satellite city of Sao Jose dos Campos.

Mr Bolsonaro has weakened the environmental enforcement agency Ibama and called for introducing more commercial farming and mining in the Amazon region, arguing it will lift the region out of poverty. Environmental advocates say this has emboldened illegal ranchers, miners and land grabbers to clear the forest.

“The PRODES figures show that Bolsonaro’s plan worked. They reflect the result of a successful initiative to annihilate the capacity of the Brazilian state and the inspection bodies to take care of our forests and fight crime in the Amazon,” the Brazilian non-governmental organization Climate Observatory said in a statement.

The president’s main policy response to global outcry over Amazon destruction has been to send in the military, who were first deployed in 2019 and are expected to remain in the region fighting deforestation and forest fires through April 2021.

More recently, deforestation declined in July to September compared with the same months a year ago, according to preliminary Inpe data, but was back on the rise in October.

European leaders such as French president Emmanuel Macron have fiercely criticised Brazil, arguing it is not doing enough to protect the forest. The election of Joe Biden as US president has raised the possibility that the United States will also ramp up pressure on Brazil over the rainforest.

Mr Biden said in a debate that the world should offer Brazil money to fund efforts to stop deforestation, and threatened economic consequences against the Latin American nation if it did not. The comment drew fierce criticism from Mr Bolsonaro, who said it was a threat against Brazil’s sovereignty.

“Let’s remember that the future (American) president knows our country,” Mourao said on Monday, speaking about Mr Biden. “He is a person with whom we will establish a dialogue at some point without major problems.” – Reuters