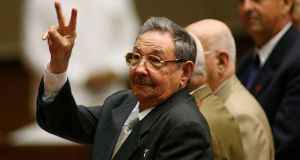 The government of Cuban president Raul Castro has described the country’s inclusion on a US list of state sponsors of terrorism as shameful. Photograph: Prensa Latina/Reuters.

In what has become an annual ritual, the United States kept Cuba on its list of “state sponsors of terrorism” and Havana reacted angrily, calling it a “shameful decision” based in politics, not reality.

Cuba said in a statement that the US government was pandering to the Cuban exile community in Miami against its own interests and the wishes of the American people.

“It hopes to please an anti-Cuban group, growing smaller all the time, which tries to maintain a policy that now has no support and doesn’t even represent the national interests of the United States,” said the statement issued by Cuba’s foreign ministry.

Iran, Sudan and Syria also are on the list, which is published annually by the US State Department. Cuba has been on it since 1982.

The terrorism designation comes with a number of sanctions, including a prohibition on US economic assistance and financial restrictions that create problems for Cuba in international commerce, already made difficult by a US trade embargo imposed against the island since 1962.

The State Department’s explanation for Cuba’s inclusion on the list discounted most of the reasons from previous years and said “there was no indication that the Cuban government provided weapons or paramilitary training to terrorist groups.”

In the past, the report fingered Cuba for harbouring rebels from the Marxist-led FARC, or Revolutionary Armed Forces of Colombia, and members of Basque separatist groups.

This year, it noted that Cuba is sponsoring peace talks between the FARC and the Colombian government and has moved to distance itself from the Basques.

Washington’s primary accusation was that Cuba harbours and provides aid to fugitives from US justice. Cuba does not deny that it has fugitives from the United States, but said none had been accused of terrorism.

Robert Muse, a Washington attorney who specialises in Cuba issues, said there is no legal basis for designating Cuba as a terrorist sponsor because of the presence of the fugitives.

He said they remain on the island because the Washington has refused to honour a longstanding extradition treaty with Cuba.

Earlier this month, the FBI placed one of the fugitives, Joanne Chesimard, on its most wanted terrorist list 40 years after she was convicted of killing a New Jersey state trooper. Chesimard, a former member of a black militant group, has been in Cuba since 1984.

Cuba rejected the notion that she or anyone else on the island was involved in terrorist activities.

“The territory of Cuba has never been used and never will be to harbour terrorists of any origin, nor to organize, finance or perpetrate acts of terrorism against any country in the world, including the United States,” it said.

Geoff Thale, program director at the Washington Office on Latin America think tank, said president Barack Obama can take Cuba off the terrorist list at any time and should do so because it is “clear that the State Department doesn’t really believe that Cuba is a state sponsor of terrorism.”

Removing Cuba from the list would improve relations with Cuba and all of Latin America, which sees US policy toward Cuba “as a reflection of US attitudes toward the region as a whole,” Mr Thale said.