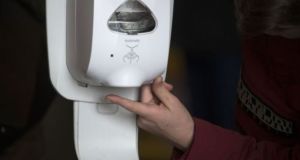 The HSE was warned by the Department of Agriculture about the ViraPro hand sanitiser more than a fortnight before it was officially recalled from schools and healthcare facilities.

The Department of Education recalled the hand sanitiser, which can cause adverse health issues, on October 22nd before schools were to close for the Halloween break.

It emerged on Sunday that a Department of Agriculture official emailed the HSE on October 7th to “strongly advise removing all ViraPro Sanitiser Product you currently have in use.”

The email was obtained by RTE under the Freedom of Information Act.

Samples of the hand sanitiser, which was purported to have 70 per cent ethanol content, were found to contain methanol, a chemical which can, with prolonged use, cause nausea, dermatitis, eye irritation, upper respiratory tract irritation and headaches.

Another email obtained by RTÉ, dated September 29th, shows a member of the HSE’s procurement team contacted an official in the Department of Agriculture about a “follow up on the ViraPro issue.”

The department, which is the State’s licensing authority for approving biocide products including sanitisers, issued notices to the HSE on October 8th ordering that the products be detained in warehouses where the sanitiser was stored.

The recall notice was not issued until more than two weeks later.

The department has said that the initial advisory notice in early October was made only to the HSE after preliminary tests results on samples of the HSE’s supply.

The HSE has said it quarantined all stock on the back of this notice and took no further action until test results were available. It has said that it acted in a timely and appropriate manner.

It was previously reported that testing by the department had carried out on samples taken at different storage locations between September 30th and October 2nd.

The product was removed from the register of approved biocides on October 20th.

Minister for Agriculture Charlie McConalogue has admitted his department should have issued a public alert and informed other Government departments, which had been using the product, when it learned on October 16th that ViraPro did not meet the standards of approval.

The minister has said that he was only informed of an issue about the hand sanitiser on October 22nd, the same day the schools were alerted with the warning around its use.

The Department of Agriculture licensed ViraPro, which is made in Turkey, on April 21st, based on the written documentation that it contained 70 per cent alcohol.

The HSE has said it purchased about 3.8 million units of ViraPro at a cost of €7.5 million.

Concerns about the the Turkish supplier’s products first surfaced in Ireland in late September when the European anti-fraud agency OLAF alerted the Revenue.

This led to consignments of the sanitiser being impounded and the samples being tested.