Covid-19: Trudeau expects most Canadians to receive vaccine by September 2021 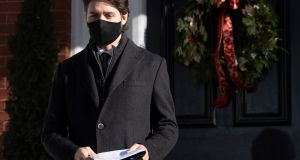 Justin Trudeau has said he expects more than half of Canadians to receive a coronavirus vaccine by next September after he was criticised for saying the country will not be among the first to get doses.

The country’s prime minister said earlier this week Canada will have to wait for a vaccine because the first ones are likely to be given to citizens of the countries they are made in.

He noted the United States, the United Kingdom and Germany have mass vaccine-production facilities but Canada does not.

Opposition parties criticised him for not ensuring Canadians get priority access to vaccines.

Mr Trudeau said on Friday he expects vaccines to start arriving early next year — but what month Canadians will get the first doses remains an open question.

“The race to get to the starting line first, I can understand, but this pandemic doesn’t get over until we reached the finish line,” he said.

“What really matters is when we get to cross the finish line and the fact that the doctors highlighted that if all goes according to plan, we should be able to have a majority of Canadians vaccinated by next September, puts us in a very good stead.”

Dr Howard Njoo, Canada’s deputy chief medical officer, said it would be by the end of next year but said Mr Trudeau’s timeline “is in the same ballpark”.

Top Canadian health officials said on Thursday that Pfizer’s Covid-19 vaccine candidate could be approved in Canada next month and if all goes according to plan, 3 million Canadians could get shots by the end of March.

The US Food and Drug Administration is meeting on December 10th to consider whether to give Pfizer approval.

Canada has a purchase deal to buy at least 20 million doses of Pfizer’s vaccine. – PA