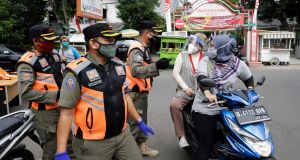 Indonesia: Police officers talk to motorists during a mask wearing campaign at a check point in Jakarta. Photograph: Mast Irham/EPA.

The number of daily confirmed cases of coronavirus in Germany and Australia have fallen after a recent uptick in infections there, as global cases passed 19 million on Friday morning.

Germany recorded 926 new coronavirus cases in the 24 hours through Friday morning, down from 1,285 the previous day and taking the total to 215,039, according to data from Johns Hopkins University.

Europe’s biggest economy has experienced an uptick in cases in recent weeks. Thursday’s total was the highest in more than three months but still far below the daily increase of almost 7,000 at the peak of the outbreak in late March and early April.

Meanwhile new infections fell to 450 in Australia’s Victoria state, down from 471 a day earlier, with 11 more people dying from Covid-19 in Australia’s second-most populous state.

Premier Daniel Andrews said about 150 people who were supposed to be self-isolating were not found at their homes when authorities carried out inspections on Thursday.

The state is under lockdown and residents in the capital of Melbourne this week started a six-week curfew between 8 pm and 5 am.

Coronavirus cases in the US increased 1.3 per cent compared with the same time Wednesday to 4.85 million, according to data collected by Johns Hopkins University. The increase was higher than the average 1.2 per cent daily gain over the past week. Deaths rose 1.3 per cent to 159,433.

Illinois reported 1,953 new cases, 11 per cent more than the previous day and the most since May 24th, according to state data. The seven-day rate of positive tests rose to 4 per cent from 3.9 per cent. Deaths declined to 21 from 30 a day earlier.

Texas’s positive-test rate jumped to 17.05 per cent, the second-highest since the pandemic began, according to state health department data figures.

Despite imposing a nationwide lockdown as early as the end of March, India’s virus curve hasn’t flattened with over 50,000 daily new cases regularly reported over the past two weeks. As the country unlocks in phases to boost the collapsing economy and people start moving about, India has emerged as one of the fastest-growing hotspots in the world with the third-highest number of cases.

Cases in the continent of Africa have surpassed one million and the actual number of infections could be several times higher with a lack of testing. Some countries have only one testing machine, it said, and some have had fewer than 500 tests per million people.

Despite imposing the longest, strictest lockdown in Southeast Asia, coronavirus cases in the Philippines have now surged to almost 120,000, eclipsing Indonesia to become the region’s biggest outbreak.

The country imposed a second lockdown on Manila and nearby areas to curb the spread of infections, even as the economy suffered its deepest contraction on record, shrinking 16.5 per cent in the second quarter from a year ago.

After enduring a strict lockdown from mid-March to the end of May, the Philippines re-opened its capital although new cases were still growing by up to a thousand every day. As people returned to offices and families gathered again, infections surged 500 per cent in over two months of easing before the government re-imposed a lockdown this week.

1 Coronavirus: Indoor dining, sports, weddings, funerals, travel to be hit as Dublin set for Level 3
2 Cluster among golfing group in Midlands a 'significant Covid-19 incident'
3 Life in Level 3: What will happen under new restrictions in Dublin?
4 English ‘chumocracy’: Boozy weekends and class disdain with the Camerons
5 Coronavirus: NPHET recommends ban on indoor dining in Dublin
Real news has value SUBSCRIBE