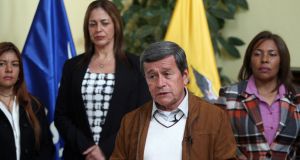 Colombia’s Marxist ELN rebels resumed attacks on oil installations and the armed forces on Wednesday, threatening the future of peace talks just hours after the expiration of a ceasefire agreement with the government.

The talks in Quito, Ecuador, had been scheduled to restart on Wednesday after a recess between the National Liberation Army (ELN) and the government of centre-right president Juan Manuel Santos.

Mr Santos said he ordered his chief negotiator back to Bogotá after the attacks, however, to weigh the future of a process that began early last year in a bid to end more than 53 years of fighting.

The ELN also staged a grenade attack on a naval base in Arauca province, injuring two soldiers.

Separately, state oil company Ecopetrol reported an attack on one of its facilities in a rural area Casanare province.

“I deplore the decision by the ELN to reactivate its terrorist attacks,” Mr Santos said in a televised address. The government was always willing to extend the ceasefire. Inexplicably, the ELN refused. Under the circumstances I have ordered the return of our chief negotiator to evaluate the future of talks.”

The group’s first-ever ceasefire, which began in October, ended overnight. The ELN has said it will not extend the truce under the original terms and wants a new deal.

Pablo Beltran, chief ELN negotiator in Quito, said the group had adhered to the conditions of the ceasefire and that the two sides had always agreed to evaluate new terms after the 101-day truce expired.

He said Wednesday’s attacks occurred in “complex situations” of war and that the group maintained its intention to negotiate a new ceasefire.

“We’re seeking a response from the government to see if it’s interested in finding a way out of this incident. If there’s a positive response, the ELN delegation will remain in Quito,” Mr Beltran said.

“But if there’s no positive response we will have to return to Colombia. ”

During the ceasefire, reached on September 4th, the insurgent group promised to suspend hostage-taking, attacks on roads and oil installations, the use of landmines and the recruitment of minors. In turn the government agreed to improve protection for community leaders and conditions for about 450 jailed rebels.

The 2,000-strong ELN has hurt the oil industry with its regular bombings of infrastructure and has taken numerous oil workers hostage over the years.

Mr Santos, who leaves office this year, signed a peace deal with the larger rebel group Farc in late 2016 after negotiations in Cuba that lasted four years.

Farc is now a political party with a candidate for president in May elections.

The ELN, founded by radical Catholic priests in 1964, has sought peace with the government before but made little progress. It is considered a terrorist group by the United States and European Union. – Reuters