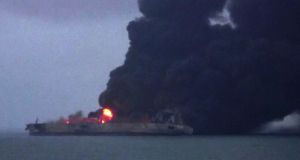 Smoke and flames coming from a burning oil tanker at sea off the coast of eastern China. Photograph: AFP

An Iranian tanker carrying one million barrels of oil ablaze off the coast of China is at risk of exploding and sinking, Chinese authorities said, as bad weather hampered efforts to locate 31 missing crew members. Rescuers found the body of one of the mariners on board the beleaguered vessel.

The Sanchi collided with the freighter Crystal on Saturday night, and there are mounting fears of environmental disaster. China’s state broadcaster CCTV ran footage of fire-fighting boats spraying water at the tanker, from which dark clouds of smoke were rising.

China has dispatched four rescue ships and three cleaning boats to the site, while South Korea sent a ship and a helicopter, and a US Navy military aircraft searched an area of about 3,600 square nautical miles (12,350 sq km) for the crew, of whom 30 were Iranian and two from Bangladesh.

The collision happened around 160 nautical miles off China’s eastern coast near Shanghai and the mouth of the Yangtze River Delta.

The crude oil on board is condensate, an ultra-light and highly volatile type, which is very low in density, highly toxic and much more explosive than normal crude oil. When it meets water it evaporates quickly and can cause large-scale explosions as it reacts with air and turns into a flammable gas, the Chinese transportation ministry said on Monday.

While expressing concern for the missing crew, Rashid Kang of the environmental group Greenpeace East said the main priority was the safety of the crew, but he was also worried about the potential environmental damage that could be caused by the one million barrels of crude oil on board.

“We are worried about the potential environmental impact that could be caused by leakage from the vessel that was holding almost 42 million gallons of crude oil. A clean up procedure is already underway and we will be monitoring its progress,” said Mr Kang.

Reuters reported that the disaster has the potential to be the worst since 1991 when 260,000 tonnes of oil leaked off the Angolan coast.

However, China’s Global Times newspaper quoted Mu Jianxin, a senior engineer at the China Institute of Water Resources and Hydropower Research, saying the oil was soluble in water which could make it easier to handle.

“Pollution caused by the leak is certain, but compared to the wide watershed of the Yangtze River estuary, the 136,000 tons of oil should not cause too serious a problem,” Ms Mu told the Global Times.

“Some physical methods can be used to dissolve or neutralise the oily pollutant,” she said.