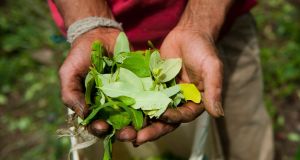 A farmer harvesting coca leaves in the department of Cauca, Colombia. The UN report estimated that enough coca was grown to produce 1,379 tonnes of cocaine – up 31 per cent on 2016. Photograph: Luis Robayo/AFP/GettyImages)

Colombia is desperate to shed its reputation as a nation dogged by the drug trade, but new figures from the United Nations show that it continues to break records for producing cocaine.

In 2017, about 171,000 hectares (423,000 acres) of the South American nation’s land was used to grow coca, the plant whose leaf is the base ingredient of cocaine – up 25,000 hectares (17 per cent ) on the year before, according to a report published on Wednesday by the United Nation’s Office on Drugs and Crime (UNODC).

Coca output now surpasses the previous record of 163,000 hectares in 2000, the year that the US-backed counter-narcotics programme, Plan Colombia, started.

This is despite a peace deal signed in 2016 with leftist rebels the Revolutionary Armed Forces of Colombia (or Farc).

That deal, which ended 52 years of civil war that killed 260,000 and displaced more than 7 million people, had provisions to formalise land ownership for peasants, and help them switch coca crops for legal alternatives such as coffee and cacao.

Coca is usually grown by poor farmers, but the plant played an important role in the conflict as the Farc would tax harvests, funneling the funds into their war chest.

The vacuum left by the Farc has been filled by myriad other armed groups, from dissident left-wing rebels who chose not to lay down their rifles to rightwing militias originally set up to fight the Farc.

Some farmers claim the military have been forcibly eradicating coca before giving them the chance to switch their crops.

In October last year police opened fire on a crowd of protesting growers in Tumaco, a coca-rich region on the country’s southern Pacific coast. Seven people died, causing a national debate on the government’s willingness to accommodate coca farmers.

The wider Pacific region, where the Farc once held sway, saw stark increases in coca production last year, with production in the three provinces lining the coast together reaching 65,567 hectares, up 13 per cent on 2016.

The latest figures are likely to alarm Washington, which has long provided aid to Colombia in its war on drugs.

Colombia’s foreign minister and the US deputy secretary of state, John Sullivan, “discussed the need for continued action to reduce coca cultivation and cocaine production in Colombia”, at a meeting earlier this month in Washington, according to a state department press release.

The US, which backed the peace process, said in June this year that coca production had increased to 209,000 hectares, a figure higher than the one reached by UNODC and Colombia’s defence ministry.

Colombia’s president, Iván Duque, said last week that he hopes to reduce coca production by 140,000 hectares in four years, the length of his term. “It is not easy, but that is the goal we want to set,” he said.

Aerial fumigation was suspended in 2015 after the World Health Organisation linked it to cancer, and experts have warned that the practice is unlikely to reduce coca production. – Guardian