Canadian election set to oust Harper in move to the left 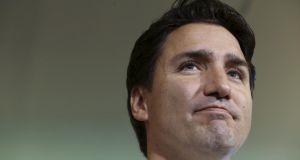 Liberal leader Justin Trudeau. “We have made very different choices from Mr Mulcair and Mr Harper when it comes to investing in Canada.” Photograph: Reuters/Chris Wattie

Canadians will vote in a federal election on Monday that looks likely to put an end to the decade-long reign of prime minister Stephen Harper’s Conservatives, and may be followed by uncertain negotiations to secure a more left-leaning government.

The opposition Liberals, under Justin Trudeau, eldest son of former prime minister Pierre Trudeau, are poised to secure the most seats in parliament,  polls suggest, while falling short of the 170 required for a majority. The worry is the Liberals, who have governed for much of the past century, will require the backing of Tom Mulcair’s New Democratic Party, which has socialist roots, to stay in power and pass legislation.

The possibility has rattled investors since the election campaign began in August and uncertainty over the election outcome has traders seeking to protect against currency swings next week.

The front-running Liberals are seeking to win back votes in Toronto and its suburbs as the race tightens.

The region is again a battleground, with Mr Harper set to appear tomorrow at a rally with Toronto’s controversial former mayor, Rob Ford, who admitted to smoking crack cocaine before leaving office.

“We have made a straightforward choice. We think the Canadian economy – and the people of Toronto specifically – need investments,” the Liberal leader said, citing his platform of infrastructure spending and a middle-class tax cut.

“We have made very different choices from Mr Mulcair and Mr Harper when it comes to investing in Canada. ”