Micheál Martin and Boris Johnson in their first meeting as Taoiseach and British prime minister in Hillsborough, Co Down, on Thursday concentrated developing the “warm relationship” between Britain and Ireland. Video: Reuters 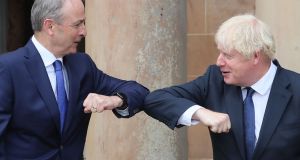 Taoiseach Micheál Martin, after meeting British prime minister Boris Johnson, has warned of the need to avoid a “second significant systemic shock” of a no-deal Brexit coming on top of Covid-19.

Mr Martin and Mr Johnson, in their first meeting as Taoiseach and prime minister at Hillsborough Castle in Co Down on Thursday, agreed to “set to work immediately” creating new structures to deal with post-Brexit British-Irish relations.

The Fianna Fáil leader expressed a degree of optimism a free trade agreement could be struck between Britain and the EU before the one-year transition period ends on December 31st.

“Where there’s a will there’s a way. It seems to me there is a landing zone if that will is there on both sides. And I think it is – the European Union side and the British side – to find that landing zone.”

He said there was a shared understanding about the implications of a no-deal Brexit or a “sub-optimal” trade agreement.

“We both agreed on one thing: Covid has had a very negative impact on our respective societies and economies. The last thing we all need now is a second significant systemic shock to our economic systems, and that’s what a no-deal Brexit would present on top of or alongside of Covid.”

Much of the relationship conducted between Britain and Ireland was through the EU, but it was now vital to have new structures in place.

“We both acknowledged that there is a need to create a new framework in British-Irish relationships post-Brexit,” he said.

Mr Johnson agreed to “intensify” partnership arrangements with the Republic and said more work could be done on bilateral deals.

He again promised Northern Ireland businesses that after Brexit they would have unfettered access to markets in Britain. “There will be no border down the Irish Sea – over my dead body.”

Announcing plans to mark next year’s 100th anniversary of Northern Ireland’s formation, he said: “From my point of view it is something obviously to celebrate, because I love and believe in the union that makes up the United Kingdom, the most successful political partnership anywhere in the world.

“But of course I appreciate there will be plenty of people who take a different point of view.”