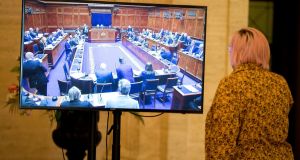 A Stormont official watches proceedings in the Northern Ireland Assembly Chamber on a television in the Great Hall at Stormont Buildings. Photograph: Liam McBurney/PA Wire

MLAs had been asked by the UK’s Brexit Secretary to give legislative consent to the European Union (Withdrawal Agreement) Bill, which lays out the terms of the UK’s departure from the EU on January 31st.

In a vote on Monday, a clear majority of members voted in favour of the motion affirming that the Assembly “does not agree to give its consent” to the Bill. There were no audible dissenters.

The decision by Northern Ireland’s MLAs will not affect the UK’s departure from the EU at the end of the month.

“This Assembly has not given its consent to the British government to legislate on our behalf,” said the deputy first minister, Sinn Féin’s Michelle O’Neill.

The parties, she said, “must work together in common cause to overcome the challenges that have been opposed upon us by Brexit.

“It’s significant that this Assembly sends a very firm message again that we reject Brexit, that we follow after Scotland has rejected Brexit, and I believe Wales will vote tomorrow to maybe also reject Brexit,” she said.

In Edinburgh earlier this month, the Scottish parliament voted to reject the Bill by 92 votes to 29. The Welsh first minister has urged assembly members in Wales to vote against it.

The Brexit Secretary, Steve Barclay, has written to Scottish and Welsh ministers expressing his “disappointment” that the devolved governments have not given their support to the Bill.

He said that while the British government should “not normally” press ahead with such legislation without the consent of the devolved administrations, the circumstances of the UK’s departure from the EU are “specific, singular and exceptional”.

While in this case the British government would proceed without their consent, Mr Barclay said, it would “continue to work to address your concerns”.

During the three-hour debate which preceded the vote, each of the North’s five main political parties spoke in support of the motion.

Northern Ireland voted to remain in the EU by 56 per cent to 44. Four of the five parties were pro-Remain. The DUP, which was pro-Leave, opposes the Withdrawal Agreement Bill over fears it will create a border down the Irish Sea.

The withdrawal deal, the DUP leader said, posed “significant challenges for Northern Ireland” and MLAs should “take a stand” to show that the Assembly is “back in business”.

Her party colleague, Gary Middleton MLA, said “the checks as proposed would lead to greater burdens for trade between GB and Northern Ireland and consequently would trade subject to the rules of the EU customs union, notwithstanding [Northern Ireland] would remain part of the UK customs territory.

The SDLP deputy leader Nichola Mallon said that the debate was an opportunity to “give the people of Northern Ireland a voice. Today we must send a united message to Boris Johnson in the UK government, to Dublin and to Brussels that collectively we reject the EU withdrawal agreement,” she said.

Ms Mallon called on the British government to “immediately rule out any future threat of a no deal Brexit.” It was not Mr Johnson or his Cabinet colleagues who would “suffer as a result of this dangerous cliff edge” she said. “It will be communities, farmers and businesses right across Northern Ireland.

“People at home are rightly concerned,” she said. “They know, given the catalogue of experiences to date, that the words of the prime minister Boris Johnson cannot be trusted.”

Alliance MLA Kellie Armstrong, said that while her party opposed to Brexit, it accepted it was now “inevitable” and the focus should be “on taking the rough edges off the Brexit deal - standing up and protecting Northern Ireland.”

“Rather than what could have been a foot in both camps for Northern Ireland, unless protections are put in place, we may well end up being marginal in both the UK and EU arrangements,” she said.

The Ulster Unionist leader Steve Aiken called for a number of “practical measures”, including the “rapid creation of the Brexit subcommittee”, to mitigate the potential impact of Brexit.

“There’s little appetite in the EU, in London, in Dublin to deliver what is best for us here in Northern Ireland,” he said. “The only way we can make these changes, the only way we can influence this is if we all join together and make this happen.” – Additional reporting PA