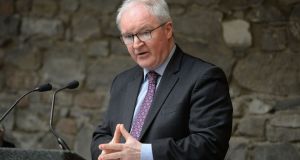 It was important that judges are seen to be able to “speak truth to power”, Lord Chief Justice of Northern Ireland Sir Declan Morgan has told Assembly members, when questioned about the public’s view of the judiciary.

Sir Declan, who was speaking to an Assembly committee on a proposed Bill of Rights for Northern Ireland on Thursday, was asked by Ulster Unionist Party MLA Mike Nesbitt for his take on the public’s view of the impartiality and independence of the judiciary.

Referring to a Daily Mail front page of 2016 that used the headline “Enemies of the People” as it criticised an English high court decision that the British government needed the consent of the Westminster parliament before it could trigger article 50 to quit the EU, Mr Nesbitt said there was evidence that when judgments were taken on political matters the “judiciary takes a hit”.

Sir Declan said there was no doubt that such headlines could be “damaging to public confidence” but what was clear was the judgment by the court was correct.

“It is maybe more important that the judiciary are seen to be able to speak truth to power,” he told the members of the ad-hoc committee on a Bill of Rights.

“Nobody really disputes now that the decision which was the subject of that headline was absolutely right, that parliament should be in control and that it’s not for the executive to go off and start changing the law on its own,” he added.

The Lord Chief Justice said that the courts in Northern Ireland had had a lot of social issues to deal with in the past 10 or 11 years which in the previous 10 years would not have been a feature of the courts.

“They have made life difficult for the courts from time to time. But I don’t think in this jurisdiction anyway that there has been a material impact upon public confidence on the independence and integrity of the judiciary as a result,” he said.

He agreed with Mr Nesbitt that such headlines had no actual impact on how judges performed their functions. “At the end of the day, we have to deal with cases that come in front of us and apply the law to them. We don’t make the law up.”

On Brexit, Sir Declan said issues such as the future of the European Arrest Warrant and data protection were arising.

It was too early to say how these and other matters would be resolved, he said. “Some of these things will give rise to problems and the matter will come before the courts. I think there is an expectation that if Brexit comes to pass that the problems will come to the fore and that the court will be asked to deal with them.”

Sir Declan said the impact of Brexit on the law was yet to be seen, but in terms of any impact on political rights it seems this would be limited. “Whether or not that turns out to be right, who knows? Anybody who can predict any of this I think is just way ahead of the posse.”

“I can see the force of saying that we are changing our relationship with Europe in a meaningful way. It makes sense to take a look and see what the pluses and minuses from the point of view of all sorts of rights are,” he added.

Sir Declan said judges would expect to be consulted on the details of any Bill of Rights.