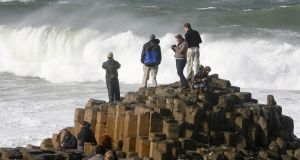 Tourism NI chief executive John McGrillen says there has been a reduction of more than 20 per cent in the number of people from the Republic visiting major tourist attractions like the Giant’s Causeway and Titanic Belfast. Photograph: Peter Muhly/AFP/Getty Images

Fewer French and German tourists are coming to Northern Ireland because of Brexit, a tourism chief said.

Tourism NI chief executive John McGrillen also said there has been a reduction of more than 20 per cent in the number of people from south of the Border visiting major tourist attractions like the Giant’s Causeway and Titanic Belfast.

Uncertainty over crossing the Irish Border and weakening of the German economy is contributing to a general fall in tourist numbers form the EU, he said.

Strong demand from Americans has helped to compensate but Mr McGrillen said 13-14 per cent of French and Germans were less likely to come.

“Those are potential consequences of Brexit and the uncertainty about being able to travel across the border and driving licences etc.”

He said demand from Germany was down by between 10 per cent and 30 per cent. “That sentiment issue does have an impact.”

He said European conference organisers were not booking in the UK and that had an effect in Northern Ireland.

“Belfast’s ability to secure conferences has diminished. There is a direct and indirect impact of that issue around consumer sentiment, with potential for less visitors from Europe.”

But, giving evidence to Stormont’s economy committee, he said that was balanced by more tourists from the east coast of the US.

He noted that had to compete with the Republic to attract visitors who primarily arrived at Dublin airport and visited the west coast, adding that the marketing budget of tourism authorities in the Republic dwarfs that of Northern Ireland.

Separately, the committee heard from inward investment agency Invest NI that businesses may have to fill out customs forms with 31 entries to send goods to the rest of the UK. It said many companies in Northern Ireland were not ready for Brexit.

The paperwork alone could cost up to £55 (€65.50) each time to fill out and smaller companies dealing in lesser loads will be disproportionately affected, the agency said.

Donal Durkan, in charge of strategy at Invest NI, said many firms he was working with were waiting to act until the EU withdrawal was clarified. He said that could leave too little time to act before the end of the transition period in December.

“The difficulty we have is that the Northern Ireland protocol probably is not going to get resolved until June or July this year,” he said. “The difficulty is the timescale, [whether] they are going to be able to put what they need to do in place to comply.

The greatest area of concern raised by local enterprises involved customs, tariffs and taxation. Mr Durkan added: “Many businesses have no prior experience of completing customs declarations. – PA