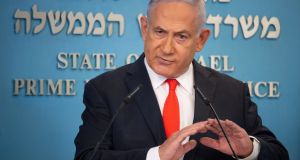 Israel will reinstate a strict countrywide lockdown this week amid a surge in coronavirus cases.

Prime minister Binyamin Netanyahu made the announcement in a televised speech on Sunday.

Beginning on Friday, the eve of the Jewish New Year, schools, restaurants, shopping centres and hotels among other businesses will shut down and restrictions on movement will be imposed.

“Our goal is to stop the increase (in cases) and lower morbidity,” Mr Netanyahu said.

“I know that these steps come at a difficult price for all of us.

“This is not the holiday we are used to.”

The tightening of measures marks the second time Israel has gone into a lockdown after a lengthy shutdown in the spring.

That is credited with having brought down what were much lower infection numbers but it wreaked havoc on the country’s economy, sending unemployment skyrocketing.

The lockdown will remain in place for at least three weeks, at which point officials are expected to relax measures if numbers are seen declining.

A sticking point in government deliberations over the lockdown was what prayers will look like during the holidays.

The strict limits on faithful prompted Israeli housing minister Yaakov Litzman, who represents ultra-Orthodox Jews, to resign from the government.

Given its population of nine million, the country now has one of the world’s worst outbreaks.

It is now recording more than 4,000 daily cases of the virus.

Israel earned praise for its initial handling of the coronavirus outbreak, moving quickly to seal the country’s borders and appearing to bring infections under control.

It has since been criticised for opening businesses and schools too quickly and allowing the virus to spread unchecked.

Much of that criticism has been aimed at Mr Netanyahu, who has faced a public outcry over his handling of the crisis and has seen thousands of protesters descend on his Jerusalem residence every week.

While lauded for his decisive response following the spring outbreak, Mr Netanyahu appeared distracted by politics and personal matters, including his trial for corruption allegations, as infections rose over the summer.

He has also been lambasted for seeming to cave to pressure from various interest groups, including most recently his ultra-Orthodox governing partners, who appeared to have convinced him to abandon a pinpointed, city-based lockdown plan that would have mostly affected ultra-Orthodox and Arab communities.

At the press conference on Sunday announcing the lockdown, Mr Netanyahu defended his response, saying Israel’s economy had emerged from the first lockdown in a better state than many other developed nations.

He said while cases are high, the country’s coronavirus mortality numbers are lower than other countries with similar outbreaks. – AP