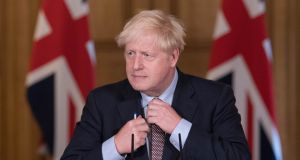 British prime minister Boris Johnson: he faces a big challenge in the House of Lords where the bill’s Conservative critics include Brexiteers Michael Howard and Norman Lamont. Photograph: Getty Images

While MPs at Westminster debate a bill that would breach the Brexit withdrawal agreement on Monday, Britain’s chief negotiator David Frost will be in Brussels for an informal round of talks about a free trade agreement.

Frost had a spiky Twitter exchange with Michel Barnier on Sunday about Britain’s plan to break international law, blaming it on what he claimed was the EU’s threat to cut Northern Ireland off from food products from Great Britain.

Yet Downing Street believes the trade talks can make progress despite Britain’s plan to break international law by walking away from its treaty commitments. This is on the basis that it is not unusual for states to continue one track of negotiations while they are in dispute about something else.

Senior British sources are also walking back Boris Johnson’s deadline of October 15th to reach a deal, after which “we should both accept that and move on”. This does not now mean that Britain will walk away from the negotiations if there is no agreement by then, only that it will prioritise no-deal preparations.

European Commission vice-president Maros Sevcovic also set a sort of deadline last week, calling on Britain to withdraw the treaty-breaking measures from the draft UK Internal Market Bill “in the shortest time possible and in any case by the end of the month”.

He warned that the withdrawal agreement “contains a number of mechanisms and legal remedies to address violations of the legal obligations contained in the text – which the European Union will not be shy in using”.

His end of September deadline should be seen in the context of the potential use of those sanctions, not as a threat to the trade talks led by Barnier and Frost.

Johnson will face a Conservative backbench rebellion in the Commons, but it is not expected to be big enough to defeat the bill. He faces a bigger challenge in the House of Lords where the bill’s Conservative critics include Brexiteers Michael Howard and Norman Lamont.

If the Lords amend the bill to remove the offending clauses the Commons will probably reinstate them, setting off a process known as “ping-pong” which sees the legislation move back and forth between the two houses.

The Lords can delay a bill for up to about 13 months if they reject it. But they are reluctant to block bills approved by the elected chamber, and under the Salisbury convention they do not reject legislation passed by the Commons based on a government’s manifesto commitment.

In this case, however, the government is arguably reneging on a manifesto commitment by welching on the “oven-ready” Brexit deal Johnson won December’s general election pledging to get done.

The Lords have in the past flexed their muscles over rule-of-law issues, notably when they rejected the War Crimes Act 1991, forcing the Commons to use the Parliament Act to pass it.

Any delay in passing the offending legislation creates an opportunity for Britain and the EU to resolve the differences that inspired Johnson’s coup de théâtre and save the prime minister from its gravest consequences.