Where is Guam and why is North Korea threatening it?

North Korea's state-run television KRT warns of a missile strike on the U.S. Pacific territory of Guam after President Donald Trump said any threat from the North would be met with 'fire and fury'. 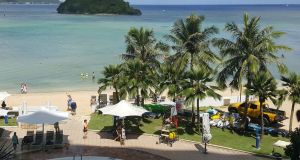 Guam is a 550sq km sovereign US territory in the western Pacific Ocean that serves as a strategic military base. Almost a third of its land controlled by the US military and about 6,000 American troops are based there.

Its location, within range of North Korean medium- and long-range missiles, and military significance to the US make it a logical target for Pyongyang.

As recently as Monday, two US air force B-1B bombers flew from Guam to join their counterparts from South Korea and Japan for a mission over the Korean peninsula, about 3,400km away, in which the air forces practised various manoeuvres.

Last month, in another show of force, the US twice flew a pair of supersonic bombers that took off from Guam over the Korean peninsula after two North Korean tests of intercontinental ballistic missiles.

The island is incredibly remote: the nearest significant population is in the Federated States of Micronesia, about 920km away. Beyond that, Papua New Guinea is 2,250km away, the Philippines are 2,600km from its shores and Japan 2,600km.

Approximately 40 per cent of Guam’s population of 162,000 is made up of the indigenous Chamorro people, while another 25 per cent are Filipino.

Though there has been some resistance and displeasure from the people of Guam over the US military’s presence, it is also essential to the island’s economy, second only to tourism.

According the island’s official tourism website, it is a destination like no other, with “star-sand beaches, crystal clear blue skies and world-famous sunsets”.

Guam was claimed by Spain in 1565 and became a US territory in 1898 during the Spanish-American War.

Japan seized it for about 2½ years during the second World War. In 1950, an act of Congress made it an unincorporated organised territory of the United States.

It has limited self-government, with a popularly elected governor, small legislature, and non-voting delegate in the US House of Representatives. Residents do not pay US income taxes or vote in the general election for US president but its natives are US citizens by birth.

The US keeps a naval base and coast guard station in the south, and an air force base in the north, which was used during the Vietnam war.

Protecting the island is the US army’s Terminal High-Altitude Area Defence, or Thaad, which is used to shoot down ballistic missiles.

Guam’s capital city is Hagåtña and its largest city is Dededo. Its chief languages are English and Chamorro. There have been various popular movements pushing for greater self-government or even US statehood, most notably a significant but failed effort in the 1980s to make it a commonwealth on par with Puerto Rico.