‘We will keep fighting’: Hong Kong protesters in for long haul 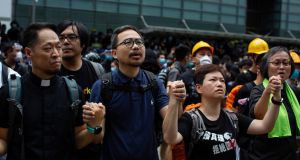 Protesters sing and hold hands outside the Legislative Council building during a protest against a proposed extradition law in Hong Kong on Wednesday. Photograph: Eduardo Leal/Bloomberg

Outside Admiralty station half a dozen people are handing out masks. A supply station is being stocked with cases of water bottles, towels, hard hats and in one case some sanitary pads and a bible. Barricades are turned into makeshift ladders, helping protesters to climb over the road divider from one side to the other. The centre of Hong Kong is a no-go zone for traffic. Taxi drivers have given up for the day and gone home.

Among the protesters opposing the government’s extradition Bill, which would allow suspects and fugitives be extradited to mainland China, there is a sense of unity, purpose and urgency.

‘We will keep fighting’

Justin Lai and Carie Ching are helping to supply protesters with water and food, underneath one of the walkways at Admiralty.

They say they are here “to say no to the policy”. They are aware debate over the extradition Bill was called off on Wednesday, but say it is not enough. “They didn’t cancel the discussion they just delay,” says Ching. “We will keep fighting,” says Lai.

One young woman, who does not want to be named, sits under an umbrella and on top of a mess of barricades and road barriers that separate police and protesters.

“I feel like the police are being really calm but you would never know what they’re going to do next,” she says. “We have experienced something like this before, the umbrella revolution, and we want to prepare as much as possible . . . to protect ourselves.”

Like many others, the delaying of Wednesday’s debate creates hope but not enough to convince her to leave.

She says: “We’re intimidating them. We’re just waiting for a miracle . . . a lot of people feel like this is the last battle and we have to fight it. I just wish the government would listen. The government should work for the people, not the other way around.”

One protester, a 55-year-old lab technician who gave his name only as Chan, says: “I am here for Hong Kong, for our next generation.

“We don’t trust China. Rules and laws can be arbitrarily applied and we can see this in Hong Kong already,” he says, citing the recent disqualifications of pro-democracy politicians and jailing of the leaders of the 2014 Occupy Central movement.

He says if the law is passed he will convert his savings to US dollars and seek to move abroad.

‘We don’t want to get violent’

Brian Chan (23), a university graduate, was pepper sprayed by police and treated at a makeshift first-aid station. His arms are red from an allergic reaction.

He says: “We don’t want to get violent and it’s wrong, but if the government keeps ignoring us we can’t rule out escalating our actions.” He declines to elaborate.

‘Law could easily be used for political purposes’

Grace Chan (30), who has a two-year-old child, says: “I don’t want my kid to grow up in a place where we have no sense of security. Although they say the law is for going after fugitives, it can be so easily used for political purpose.” – Guardian