In New Delhi, Indian farmers protesting against agricultural reforms breached barricades with their tractors and clashed with police, who fired tear gas to restrain them. Video: Reuters 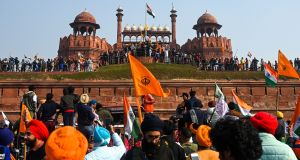 Protesters stand on the ramparts of the Red Fort in Delhi as farmers continue to protest against agricultural reforms. Photograph: Sajjad Hussain/AFP via Getty Images

Farmers protesting against new agriculture laws in India broke through police barricades around the capital and entered the grounds of Delhi’s historic Red Fort on Tuesday, in chaotic and violent scenes that overshadowed the country’s Republic Day celebrations.

Police hit protesters with batons and fired tear gas to try to disperse the crowds after hundreds of thousands of farmers, many on tractors or horses, marched on the capital. One protester was confirmed to have died in the clashes and dozens of police and protesters were injured.

Mobile internet services were suspended in parts of Delhi and some metro stations closed. As the clashes continued into the afternoon, home minister Amit Shah met Delhi police to discuss how to get the protests under control.

Standing on the ramparts of the Red Fort was Diljender Singh, a farmer from Punjab, who held aloft the Nishan Sahib, the flag of Sikhism.

“We have been protesting for the last six months but government didn’t bother to listen to us,” Mr Singh said. “Our ancestors have charged this fort several times in history. This was a message to government that we can do it again and more than this if our demands are not met.”

Tens of thousands of farmers have camped on the outskirts of the capital since November, protesting against new laws that deregulate produce markets, which they say will destroy their livelihoods, offer no protection for crop prices and leave them at greater risk of losing their land.

Authorities had agreed to let the farmers stage a tractor rally as long as they waited for the official Republic Day parade to finish. But flag-waving protesters on at least four major arteries climbed over or just pushed aside the barricades and concrete blocks and pressed on into the city.

Some protesters reached a junction about 3km from where the prime minister, Narendra Modi, and other government leaders watched tanks and troops parade past and fighter jets fly overhead. Mr Modi waved to crowds and was driven back to his residence before any personal confrontation with the farmers, the biggest challenge his Hindu nationalist government has faced in its six years in power.

Jaspal Singh (50), a farmer from Gurdaspur district in Punjab, said nothing would break the resolve of the protesting farmers. “No matter how much force the Modi government uses we are not going to succumb,” he said. “The government is trying to give a bad name to farmers by planting their men among the protesters to do violence. But we are going to take this agitation ahead peacefully.”

Mr Singh was among those who have been camped out at the Delhi border. “I have promised my family and my villagers that I will not return home till the laws are repealed,” he said while walking on Delhi-Karnal highway.

Agriculture employs more than 40 percent of India’s population but it is a sector plagued by poverty and inefficiency, with farmers often selling their crops at less than cost. Rates of farmer suicides in India are among the highest in the world.

Farmers say their plight has been ignored for decades and that the changes, aiming at bringing private investment into agriculture, will only put farmers at the mercy of large corporations.

Malkeet Singh (60), from the Mansa area of Punjab, said it was “now or never” as he walked alongside thousands of fellow protesting farmers.

“If we do not protest right now against these black laws, our children will die of hunger. We will not go back until the laws are reversed,” said Mr Singh, who had walked 35km to reach the protests.

The farmers say the new laws were introduced with no consultation and have demanded their complete repeal. Nine rounds of negotiations with the government have failed to reach an agreement.

The issue has now been raised with the supreme court, which suspended the laws and established a special committee to attempt to sort the deadlock. However, farmers’ leaders said they would not co-operate with the committee, accusing the panel of being too pro-Modi.

Last week, farmers rejected an offer by the government to suspend the laws for 18 months, saying they would settle for nothing other than a complete repeal.

The government had attempted to get the supreme court to halt the tractor protest, saying it would be “an embarrassment to the nation”.

The storming of the Red Fort prompted outrage from politicians who had been supportive of the farmers’ cause. Amarinder Singh, chief minister of Punjab, urged farmers to vacate Delhi. “Shocking scenes in Delhi,” he said in a tweet. “The violence by some elements is unacceptable. It will negate goodwill generated by peacefully protesting farmers.”

Samyukta Kisan Morcha, an umbrella organisation representing more than 40 farmers’ unions, condemned those who had taken part in the clashes and said that “anti-social elements had infiltrated the otherwise peaceful movement”.

“We condemn and regret the undesirable and unacceptable events that have taken place today and dissociate ourselves from those indulging in such acts,” said the group in a statement. – Guardian