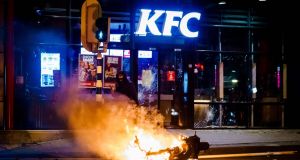 A vehicle is set on fire in Rotterdam, where 60 rioters were detained overnight. Photograph: Marco de Swart/ANP/AFP via Getty Images

More than 150 people were detained by Dutch police in the third night of riots in cities across the Netherlands, apparently triggered by a night curfew aimed at curbing the coronavirus.

It comes after 240 people were arrested over the weekend as rioters and police clashed. Roaming groups continued to set fires, throw rocks and loot stores on Monday night.

The nation’s first overnight curfew since the second World War was imposed despite weeks of decline in new infections, following a warning by the National Institute for Public Health over a new wave due to the “British variant” of the virus.

Ten police were injured in the port city of Rotterdam on Monday, where 60 rioters were detained overnight, Dutch news agency ANP said on Tuesday.

Two photographers were hurt after being targeted by rock-throwing gangs, one in the capital, Amsterdam, and another in the nearby town of Haarlem, broadcaster NH Nieuws said.

In the east of the capital, at least nine people were held after clashes with riot police. Store windows were smashed and an angry group attacked a police van, witnesses said.

Over the weekend, riot police used water cannon, dogs and horses in Amsterdam and 10 other cities to disperse gangs who burned down a temporary coronavirus test centre in one case on Saturday night, and pelted rocks and stones at a hospital treating Covid-19 patients on Sunday evening.

One police union said it was the worst sustained violence it had encountered in 40 years.

On Monday the Netherlands’ caretaker prime minister, Mark Rutte, ruled out calling in the army to impose order. Mr Rutte rejected the idea that the rioters were genuine protesters, commenting: “This is not on. Anyone normal will look at these horrific scenes and ask – what came over these people?

“We’re not taking these measures for fun,” he added. “We are taking them because this pandemic is forcing us to restrict our freedoms. So this has nothing at all to do with protesting. It is criminal violence – and that is how we intend to deal with it.”

Schools and non-essential shops have been shut since mid-December, after bars and restaurants were closed two months prior.