US and Chinese warplanes fly too close over South China Sea 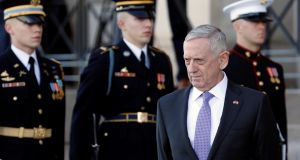 US defence secretary James Mattis: says all diplomatic efforts should be made. Photograph: Yuri Gripas/Reuters

In the latest sign of growing tension in the region, two military aircraft from the US and China inadvertently flew too close to each other in an “unsafe” encounter over a disputed part of the South China Sea.

The two surveillance warplanes – a People’s Liberation Army Air Force KJ-200 and a US Navy P-3C Orion – came within 300 metres of each other above the Scarborough Shoal, which lies 124 nautical miles off the Philippine coast and is within the Philippines’ exclusive economic zone.

The area is claimed as sovereign territory by China, which seized the area from the Philippines in 2012. Last year an international tribunal in The Hague rejected Beijing’s claims in the South China Sea, but China has ignored the ruling.

The aircraft incident happened as US president Donald Trump held his first phone call since his inauguration with his Chinese counterpart, Xi Jinping, soothing fears of a major rift between the two countries.

However, as things stand, China and the US are diametrically opposed on the South China Sea. In his senate confirmation hearing, US secretary of state Rex Tillerson said China should not be allowed access to islands it has built in the disputed territory, and the White House also vowed to defend “international territories” in the strategic waterway.

US defence secretary James Mattis said all diplomatic efforts should be made to resolve disputes over the South China Sea, and accused China of “shredding the trust” of its neighbours.

China resents Washington having any involvement at all in the South China Sea, which it sees as its sphere of influence.

The area was in the news in December last year when a Chinese navy ship grabbed a US Navy underwater drone operating in the area. It was later returned.

The Philippines said this week that it expected China to start building a military outpost at Scarborough Shoal, which is in the eastern reaches of the South China Sea. Military installations on the shoal are seen as the last major physical step required to secure control of the territory within China’s “nine-dash line”, a demarcation drawn up after the second World War.

Also this week, a US think tank said that satellite images suggested China has upgraded its military infrastructure in the disputed Paracel Islands in the South China Sea.

China has already built islands and military aircraft-ready airstrips on reefs and islets in the Spratlys archipelago, a strategic location in the southern part of the sea.

China claims most of the South China Sea, through which a third of the world’s maritime trade passes every year. Taiwan, Malaysia, Vietnam, the Philippines and Brunei each have competing claims with China to other parts of the sea that command strategic sea lanes and rich fishing grounds, along with oil and gas deposits.

“We will address the issue in appropriate diplomatic and military channels,” said US Pacific Command spokesman Maj Robert Shuford in a statement about the aircraft incident. “The US Navy P-3C was on a routine mission operating in accordance with international law.”

The incident was the first major one since May last year, when two Chinese fighters intercepted a surveillance aircraft over international waters in the northern part of the South China Sea, coming to within 50 feet and forcing the US pilot to descend.