Philippine President Rodrigo Duterte sings at a gala dinner, adding that he was asked to do so by US President Donald Trump. Trump's visit is part of an Asian summit. 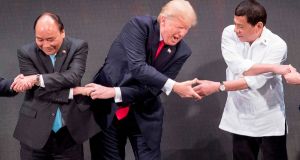 Donald Trump has hailed his “great relationship” with Philippines president Rodrigo Duterte, who stands accused of acting with impunity over a brutal war on drugs that has left thousands dead.

The US president made no mention of human rights during brief remarks to reporters prior to a meeting with his counterpart, and both leaders ignored shouted questions about the drugs crackdown.

Mr Trump is in the country with leaders of 18 other nations for two days of summits on the final leg of a headline-grabbing tour of Asia dominated by the North Korean nuclear crisis.

According to a spokesman for Mr Duterte, human rights issues were not raised during the meeting, although the pair did discuss their mutual distaste for Barack Obama.

“The issue of human rights did not arise. It was not brought up,” Harry Roque said of a 40-minute conversation in Manila. “It was President Duterte who brought up with President Trump the drug menace in the Philippines, and the US president appeared sympathetic and did not have any official position on the matter but was merely nodding his head,” he said, adding he was present.

Later, the White House press secretary, Sarah Huckabee Sanders, said the matter of human rights came up “briefly”, although she did not say which president raised the issue.

Prior to their meeting, Mr Trump said he and Mr Duterte “had a great relationship”. The Filipino leader then told reporters that the two presidents would speak privately, ushering out journalists he jokingly referred to as “spies”.

The duo had earlier shared another laugh when, during a traditional crossed-arms group photo at the Asean summit, Trump struggled to reach his neighbours’ hands. A brief struggle ensued, leading to some awkward photos that quickly spread across social media.

Mr Roque described the private meeting as “warm and friendly”, adding: “It’s very apparent that both of them have a person who they consider as not their best friend. They have similar feelings towards former US president Barack Obama.”

The absence of a proper discussion about rights is sure to anger critics of Mr Duterte. Rights groups and US politicians had strongly urged Mr Trump to confront Mr Duterte on the drugs war.

Mr Duterte, a former prosecutor, has taken an indignant stance to criticism, warning the Catholic Church “don’t f**k with me” and accusing the UN of issuing “shitting” statements about his policies. On Friday, he boasted that he once stabbed a person to death in his latest apparent admission of murder, adding to a list of similar public statements, including a claim that he pushed a man out of a helicopter.

“At the age of 16, I already killed someone,” Mr Duterte said during a speech in Vietnam, where he briefly crossed paths with Mr Trump on the sidelines of another international summit.

Relations between the US and its former colony, allies since the second World War, were at a low during Mr Obama’s tenure. Mr Duterte has since pushed for better ties with Russia and China.

Mr Trump and Mr Duterte seem to have warmed to each other after meeting for the first time on Saturday at an Asia-Pacific Economic Cooperation (Apec) group meeting in Vietnam.

On Sunday, Mr Duterte crooned a hit Filipino love song called Ikaw (You) at a gala dinner for summit leaders in Manila, saying it was “on the orders” of Mr Trump. One of the song’s verses, translated from Filipino, begins: “You are the light in my world, a half of this heart of mine.”

Mr Trump has generally avoided publicly admonishing foreign leaders for rights abuses and has even shown an affinity for rulers with autocratic tendencies, including the Egyptian president, Abdel-Fatah al-Sisi, and the Russian president, Vladimir Putin.

At the two leaders met, hundreds of left-wing protesters clashed in central Manila with riot police, who used water cannons to disperse the crowds.

The demonstrators chanted against the drugs crackdown as well as other issues such as Mr Trump’s bellicose rhetoric on North Korea. They burnt an effigy of the US president that showed the billionaire developer with four arms, all bent into the shape of a swastika.

Mr Duterte has regularly been described as the “Donald Trump of Asia” for his mercurial temperament and anti-establishment populist support.

Mr Trump had previously praised Mr Duterte’s bloody crackdown, saying he was doing an “unbelievable job on the drug problem”. He continued to shower the president with compliments on Monday.

“Rodrigo, I would like to commend you on your success as Asean chair at this critical moment of time,” he said at a press conference. “The show last night was fantastic. And you were fantastic.”

The Duterte meeting came as the US president wound down his 12-day Asia tour. On Monday, Mr Trump also met the Australian prime minister, Malcolm Turnbull, with whom he had a contentious phone call last winter, and the Japanese prime minister, Shinzo Abe, who hosted the president in Tokyo earlier in the trip.

Mr Trump raved about his accomplishments on his five-nation journey, including on trade and North Korea, but said he would wait until his return to Washington on Wednesday to elaborate with a “major statement”. – Guardian service