US government restricts travel to Cuba with new rules 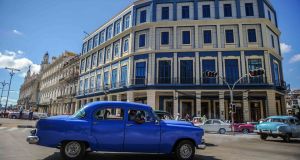 A car passes by the Telegrafo Hotel in Havana on Wednesday. Tighter restrictions on US travellers to Cuba will go into effect on Thursday, the White House said. Photograph: Yamil Lagey/AFP/Getty Images

The US government made it tougher on Wednesday for Americans to book trips and do business with Cuba, making good on a pledge by President Donald Trump to roll back his Democratic predecessor’s move toward warmer ties with Havana.

The restrictions, which take effect on Thursday, are aimed at preventing the military, intelligence and security arms of Cuba’s Communist government from benefiting from American tourists and trade, the White House said.

They fill in the regulatory detail on a Trump policy speech in June, in which the Republican president called for a tightening of restrictions. Mr Trump said then that the Cuban government continued to oppress its people and former president Barack Obama had gone too far in a 2014 diplomatic breakthrough with Washington’s former Cold War foe.

The regulations include a new list of 180 government entities, holding companies, and tourism companies from which Americans are banned from doing business. The list includes 83 state-owned hotels, including famous hotels in Old Havana such as Ernest Hemingway’s erstwhile favorite haunt Hotel Ambos Mundos, as well as the city’s new luxury shopping mall.

While US travellers will still be able to make authorised trips to Cuba with a US-based organisation and accompanied by a US representative of the group, it will be harder for them to travel individually, according to the new regulations. Before Mr Obama’s opening, travel by many Americans was similarly restricted to such organised trips.

Travellers need to be able to show a “full-time schedule” with activities that support Cuban people and show “meaningful interaction”, going beyond merely staying in rooms in private homes, eating in private restaurants, or shopping in private stores, an official told reporters on a conference call.

The administration says it is keen to support such small private enterprises that have sprung up around the country under the Cuban government’s reforms to the largely state-controlled economy.

“Staying or eating or shopping in some of those privately owned places is something that we wanted to encourage. But what we wanted to say is, that alone is not enough,” the official said.

There was no immediate response to the new regulations from the Cuban government.

Business contracts and travel arrangements already in place before the announcement will be allowed to go ahead and will not be subject to the restrictions, officials told reporters.

The list of entities that Americans cannot do business with includes a special development zone at Cuba’s Mariel port, which Cuba hopes to develop into a major Caribbean industrial and shipping hub with tax and customs breaks.

The National Foreign Trade Council, a business lobby group in Washington, called the Mariel restriction “counterproductive” because it would hurt a Cuban government initiative that could potentially benefit Cuban workers.

The head of an educational travel company said there were still many legal avenues – as well as commercial flights, cruise ships, US-owned hotels, and tour providers – to enable Americans to visit Cuba. But he said the new restrictions would hurt Cuba’s private sector.

“US backtracking on Cuba could not come at a worse time,” said Collin Laverty, president of Cuba Educational Travel.

Mr Obama said at the time of the detente he reached with Cuban president Raul Castro that he was trying a new approach to Cuba because decades of efforts by Washington to force change by isolating the island had not worked.

But critics, including some Democrats, said that he had made too many concessions without winning much in return from Havana.

Democratic senator Bob Menendez, a Cuban-American from New Jersey, praised the new rules on Thursday, calling them a “step in the right direction” toward insisting on respect for human rights in Cuba.

But Democratic senator Patrick Leahy said the regulations would hurt Cuban entrepreneurs. Mr Leahy noted they came as Trump was being “feted in Beijing” by a Communist government “in a country to which Americans can travel freely”.

“The hypocrisy of the White House ideologues is glaring,” Mr Leahy said in a statement.

Mr Trump’s rollback of Mr Obama’s opening has not affected a centrepiece of the detente, the restoration of diplomatic ties and the opening of embassies in Havana and Washington. – Reuters