‘The university staff are gone and the foreign students are gone’

The frontline in the Hong Kong protests has shifted to the university campus, where hundreds of students are now in siege mode 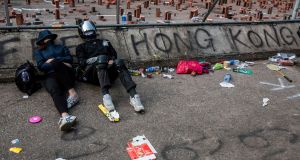 The university was preparing for a big anniversary week with celebratory performances and graduation ceremonies planned. Instead, it now stands as an embattled fortress protected by hundreds of exhausted, scared yet resolute students.

The teaching and management staff of City University of Hong Kong are nowhere to be seen. The corridors in the once orderly campus are covered with graffiti and shards of glass.

While students have been at the forefront of the pro-democracy protests that have paralysed many parts of the city for the past months, in recent days the frontlines have shifted to the campuses.

Many students have left the university in recent days, but those that stayed behind are deep in siege mode. They work quickly and silently. They say the riot police will be back in numbers and that it will be bloody. They just don’t know when. In the meantime, they arm themselves and secure their fortress as best they can.

The lecture halls, the libraries, the canteens and the admin offices all stand battle-scarred and still. The silence is broken only when black-clad and masked students return to haul out remaining desks, chairs, blackboards, trays, pieces of metal – anything that can be used as a shield, an impediment or a weapon.

The bookshop’s windows have been smashed and chunks of thick glass lie on the display books. A printed note on the shutter is a reminder of the politeness Hong Kong is renowned for, even in testing times.

“The bookshop will be closed today. Sorry for any inconvenience caused.”

Outside, red and grey pavement bricks were being dug up, brought to strategic locations, and chipped into fist-sized projectiles. Bows, arrows and javelins raided from the sports department were lined up beside a container of petrol. A few students were tweaking the workings of a giant catapult made out of bamboo poles.

Beer bottles were being filled up with petrol, stuffed with white rags, and stored in neat rows in crisp boxes.

A group of girls were using meat cleavers and small blades to hack away at trees and bushes, and dragging the branches to the blockades below.

Tennis racquets were readied to return the tear gas canisters to the server. Flower pots, railings, bricks and nails were being set out on the approaching roads to slow advances.

Pots of noodles, bars of chocolate, energy drinks and water stood in piles. Cars pulled up every few minutes outside the nearby shopping centre, driven by parents or supporters, to drop off boxes of supplies to a collection team. Normally a brand-name mecca bustling with wealthy consumers, the shopping centre has been shuttered since the students set its giant Christmas tree ablaze in the atrium earlier in the week.

The university is near the top of a steep hill, the bane of students’ lives normally as they trudge up and down to classes, but now a vantage point and their greatest defence. High up the hill are the halls of residence, separated from the main campus by a footbridge. And it is on this footbridge the students pitch for battle.

An umpire’s chair has been brought up from the tennis court for the look-out. Desks are zip-tied to railings to barricade from the rubber bullets and tear gas. Police fired 1,576 rounds of tear gas and 1,312 rubber bullets at students on a similar footbridge at the Chinese University on Monday, so they know what to expect.

Edgy students peer down into the valley below, on to the deserted, debris-strewn street. On Thursday afternoon the university told them to evacuate the halls of residence immediately. Like other universities, they have cancelled all classes for the rest of the semester and they want the students to leave now. The hundreds remaining are defiant and bracing for a fight.

Some of those that have left already are the students from the Chinese mainland.

“We were terrified. This is so dangerous now,” said one mainland student called Mindy, who left on Monday. “They are burning Chinese flags and saying they hate China and anyone who supports the government.”

One man who argued with the protesters earlier in the week was doused with flammable liquid and set alight. He remains in a critical condition. And a 70-year-old street cleaner died on Thursday after he was reportedly hit on the head with a brick during a stand-off between protesters and government supporters.

There are often heated discussions in Hong Kong about the fact that more than a million mainland Chinese have settled in Hong Kong since the 1997 handover, and about the wealth and influence they bring to the city.

“They [the protesters] are racist. They say they want democracy, and rights, but the main thing they want is that the mainland Chinese leave,” Mindy said.

A 21-year-old leader of the students’ union, who gave his surname as Wong, said that ordinary mainland people were not the enemy.

“We are not racist. We have three enemies: the police, the Hong Kong leaders, and the Beijing government,” he said.

Given that this week one protester died, apparently falling to his death near a clash with police, and another was shot in the abdomen, he said it was wise for the mainland students to leave as violence was escalating.

“Things are getting out of control. There is so much anger. It is reasonable that they leave now,” he said. “If they argue with some of the protesters, there could be big trouble.”

Most of the international students have left too, with only a few around the halls on Thursday.

There were hugs, emotions and high-fives as two American students wheeled their suitcases over the footbridge on the way to the airport.

Friday marked five months to the day since chief executive Carrie Lam suspended the proposed extradition Bill, which could have seen Hong Kong suspects tried in mainland Chinese courts. While that proposal set off the protests, it quickly morphed into a wider movement with demands for an independent inquiry into allegations of police brutality, the introduction of universal suffrage and an amnesty for all those arrested.

More than 4,000 protesters have been arrested since June, with almost all of them still free as the cases slowly move through the system. As Beijing has threatened recently to impose stricter laws on Hong Kong, many feel it intends to crush this movement through the courts rather than sending in troops.

One third-year law student on the bridge named Brian is facing a charge of rioting, a common one for the protesters, which can carry a term of up to 10 years. He barks out orders like a drill sergeant as more supplies are brought up the steps.

As he talks, he switches between his parallel worlds. After discussing the barricades, he then said he was stressed as he had a class assignment to hand in soon, which should still be submitted even though classes were suspended. He can still communicate with his supervisor online, he said.

“I just don’t know if I’ll get the time,” he said. “We don’t even get time to sleep.” He also discusses the upcoming student union elections and the role he wants to play in them.

“But who knows. Maybe none of that matters. Maybe we will all be in jail,” he said, shaking his head and letting out a nervous giggle.

For now, he and his college mates have other things to worry about. Word has come down to the bridge that the university has threatened to ask the police to help clear the dormitories if they do not leave immediately.

“The university staff are gone and the foreign students are gone. And the media are all over the city at different places,” he said.

“When the police come there will not be many witnesses. They hate us. I am afraid when they come it will be bad . . . very bad.”