US envoy ‘intimidated’ by Donald Trump during live testimony 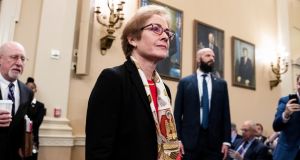 Marie Yovanovitch: ‘It’s very intimidating . . . I can’t speak to what the president is trying to do, but the effect is to be intimidating.’ Photograph: Michael Reynolds/EPA

US president Donald Trump has been accused of witness intimidation as he live-tweeted disparaging comments about former ambassador to Ukraine Marie Yovanovitch during her public testimony to the impeachment inquiry.

In one of the most dramatic moments of Friday’s public hearing, Democratic chairman of the inquiry Adam Schiff intervened to read out a tweet sent by Mr Trump about the diplomat while she was testifying.

“Everywhere Marie Yovanovitch went turned bad. She started off in Somalia, how did that go?,” Mr Trump tweeted about the career diplomat. “Then fast forward to Ukraine, where the new Ukrainian President spoke unfavorably about her in my second phone call with him. It is a U.S. President’s absolute right to appoint ambassadors.”

Ms Yovanovitch was appointed as ambassador to Ukraine in 2016 and was removed by Mr Trump earlier this year.

When asked by Mr Schiff for her response to the president’s tweet, Ms Yovanovitch said: “It’s very intimidating . . . I can’t speak to what the president is trying to do, but the effect is to be intimidating.”

Mr Schiff condemned Mr Trump’s actions. “We saw today witness intimidation in real time by the president of the United States, ” he said during a break in proceedings.

“Once again, going after this dedicated and respected career public servant in an effort to not only to chill her but to chill others who may come forward. We take this kind of witness intimidation and an obstruction of the inquiry very seriously.”

Ms Yovanovitch is giving evidence in the impeachment inquiry against Mr Trump in the House of Representatives . If the House votes, as expected, to impeach the president, a trial would then take place before the Senate.

At the heart of the investigation is a July 25th phone call between Mr Trump and his Ukrainian counterpart, Volodymyr Zelenskiy, in which the US president asked for an investigation into his political rival Joe Biden and rightwing claims of Ukrainian meddling in the 2016 US election.

....They call it “serving at the pleasure of the President.” The U.S. now has a very strong and powerful foreign policy, much different than proceeding administrations. It is called, quite simply, America First! With all of that, however, I have done FAR more for Ukraine than O.

Mr Trump denies there was anything improper about the call or that Mr Zelenskiy was offered a quid pro quo in return for an investigation into Mr Biden and his son Hunter, who was on the board of a Ukrainian energy company.

Giving evidence to the impeachment inquiry on Friday, Ms Yovanovitch said she felt threatened by Mr Trump’s comments about her in the phone call with Mr Zelenskiy on July 25th. Mr Trump described Ms Yovanovitch during the call as “bad news,” and said she was “going to go through some things”.

“Did you feel threatened?” Daniel Gordon, counsel for the Democrats, asked.

“I did,” Ms Yovanovitch replied. “It sounded like a threat.”

She said she was “shocked and devastated” that she featured in a phone call between two heads of state in such a manner. “The colour drained from my face . . . Even now words kind of fail me.”

Ms Yovanovitch is the third witness to testify publicly into the ongoing impeachment inquiry which began in September, and entered a new public phase this week with live televised hearings.

Democrats are seeking to build a case against Mr Trump as they try to establish if he committed an impeachable offence by making aid to Ukraine contingent on the government opening investigations sought by the White House.

But Republicans questioned Ms Yovanovitch’s relevance to the inquiry, noting she was not involved in Ukraine policy at the time of the July 25th phone call. Senior Republican Devin Nunes also pointed out that she had not spoken to Mr Trump or acting White House chief of staff Mick Mulvaney at any point in 2019, claiming that her testimony would be more appropriate for the subcommittee on human resources at the foreign affairs committee.

In her opening statement to the committee, Ms Yovanovitch described a “crisis in the State Department” where she has worked for 33 years.

“The policy process is visibly unravelling, leadership vacancies go unfilled, and senior and midlevel officers ponder an uncertain future and head for the doors,” she said. She referred to a “hollowing-out” and also indirectly criticised secretary of state Mike Pompeo.

“I remain disappointed that the department’s leadership and others have declined to acknowledge that the attacks against me and others are dangerously wrong, ” she said.

Later under questioning by Democrats, she described a series of emails and phone calls between herself and senior State Department officials in March following disparaging tweets by the president’s son, Donald Trump junior, and the president himself.

She said she asked under secretary David Hale for a public statement of support by the secretary of state, telling him that it was “really important that the secretary himself come out and be supportive”. However, she was told that this was not possible as the State Department felt that any statement could be undermined by the president in a tweet.

Outlining to lawmakers what she says was a smear campaign against her by the president’s personal lawyer Rudy Giuliani and others, which ultimately led to her removal from her post in Kiev, she said “these events should concern everyone in this room”.

Describing US foreign policy efforts in Ukraine to root out corruption she said: “When our anti-corruption efforts got in the way of a desire for profit or power, Ukrainians who preferred to play by the old, corrupt rules sought to remove me. What continues to amaze me is that they found Americans willing to partner with them.”

Later on Friday, the committee was scheduled to hear privately from David Holmes, a staff member at the US embassy in Kiev who is understood to be the staffer who overheard Mr Trump asking about the status of investigations in a phone call with ambassador to the EU, Gordon Sondland, on July 26th.

Additional witnesses may provide closed-door depositions to the committee over the weekend, with the public hearings continuing next Tuesday.

1 Funeral of John Hume hears peacemaker ‘gave dignity and life to so many people’
2 NPHET calls for ban on non-essential travel from countries with high Covid-19 rates
3 Fresh investigation into the murder of Michaela McAreavey in Mauritius
4 Irish in Canary Islands: Life has changed dramatically
5 Pubs to stay closed until September at least as restrictions tightened significantly
Real news has value SUBSCRIBE