Plans have been unveiled to build a 1.2km public terrace atop the Nazi structure 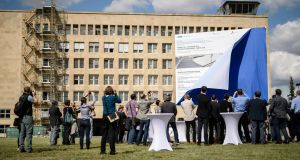 A press event on the start of the construction of Tower THF in Berlin, Germany. Photograph: Clemens Bilan/EPA

After an 80-year delay, Adolf Hitler’s unrealised dream for his hulking Tempelhof airport in Berlin is finally coming to pass.

Berlin city authorities have unveiled plans to build a 1.2km public terrace atop the Nazi structure, opening in 2020. The city’s newest tourist attraction, aiming to repeat the success of Manhattan’s “High Line” park on a disused train line, was dubbed by one Berlin wag the “Heil Line”.

The €25 million renovation work will begin next year on one wing of the airport. It was built – but never completed – by the Nazi government, and part of the building was used by the Allies for the 1948-49 Berlin Airlift and, later, served as a civilian airport until its closure in 2008.

A decade later the massive complex, with floor space equivalent to 43 football pitches, is still largely empty. The city knocked back several investors and, in recent years, has housed refugees in hangars out the back. The former airfield, which is larger than New York’s Central Park and the principality of Monaco, has been opened to the public.

The new investment plan will breathe new life into a building Hitler demanded be made so intimidating that it would “silence every snide remark about Germany”.

Part of Hitler’s plan – never realised – was to use the vast rooftop space as viewing platforms for air shows.

As well as the rooftop walkway, visitors will be allowed into a renovated wing of the airport, to be used as exhibition space, and the glass tower formerly used by air-traffic controllers.

Jutta Heim-Wenzler, head of the development team, said a museum dedicated to the Cold War allies, as well as restaurants and cafes, would be part of the final project.

“The building should no longer be a barrier but a bridge to the city and a gateway to the airfield,” she said.

While new life is coming to Tempelhof’s roof, Berlin still has no idea what to do with the airport complex itself, one of the world’s largest buildings.

Uncertainty, too, surrounds the future of the airfield. Plans to build apartments on the edge of the airfield were rejected by Berliners in a 2014 referendum. But pressure is growing to overturn that decision, given growing housing pressures in the German capital.

Last year Berlin’s state building minister Katrin Lompscher accused Berliners of “egotism” for rejecting any new apartments on the site. Quizzed at the opening, she said the result of the 2014 referendum to leave Tempelhof undeveloped would be respected – for now.