Thailand declares state of emergency and cracks down on protesters 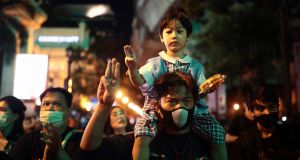 A pro-democracy protester and a child hold up a three-finger salute during a demonstration in Bangkok on Thursday. Photograph: Jack Taylor/AFP via Getty Images

Thailand declared a state of emergency in Bangkok as police and soldiers dispersed demonstrators on Thursday, marking the start of a crackdown on a student-led protest movement.

In an announcement published on Thailand’s Royal Gazette website, the government said it took the measure because of “an action that had an impact on a royal motorcade” carrying members of King Maha Vajiralongkorn’s family, as well as national security and economic considerations.

Prime minister Prayuth Chan-ocha declared the state of emergency after about 10,000 anti-government protesters rallied at Bangkok’s Democracy Monument on Wednesday before marching to Government House, the seat of the Thai government. They broke through police barricades and surrounded the building, pressing their demand for the resignation of Mr Prayuth’s administration.

Protesters also jeered and taunted Queen Suthida, the wife of King Maha Vajiralongkorn. They raised their movement’s three-fingered salute and shouted “Our tax money” as she passed within metres of demonstrators on her way to visiting two Buddhist temples. Taunting the queen is an unheard of affront in a country where the monarchy is shielded from public criticism by strict defamation and other laws.

Human Rights Watch said that at least 27 people were in police custody, including protest leaders Anon Nampa, Parit “Penguin” Chiwarak and Panusaya “Rung” Sithijirawattanakul, who at an August demonstration electrified Thailand by reading out 10 demands to rein in the power of the monarchy.

The group said they were being detained without access to lawyers and that under Thailand’s emergency law they could be held without charge for up to 30 days.

Mr Nampa said that he had been taken to Chiang Mai in northern Thailand by helicopter without a lawyer. “This is a violation of my rights and extremely dangerous to me,” he said in a Facebook post.

“It appears that various groups of people have persuaded, incited and carried out a public gathering which is against the public gathering act in Bangkok, creating turbulence, chaos and disorder for people,” Mr Prayuth said in the announcement.

“There was an action that had an impact on a royal motorcade,” he added. “There are reasonable grounds to believe that there have been severe acts affecting the national security, life and property of the state or of individuals.”

Thailand’s crackdown coincided with a visit to the country from the king. The king, who lives in Germany and had visited the country only on one-day visits in recent months, arrived on Saturday in Bangkok for what Thais expect to be a longer stay.

Since ascending the throne after the death of his father King Bhumibol Adulyadej in 2016, the king has taken ownership of tens of billions of dollars’ worth of crown property and put two army regiments under his direct command.

In declaring the emergency, Mr Prayuth said the government was using powers granted under a 2005 emergency act, which it invoked in March at the beginning of the country’s coronavirus lockdown.

The announcement added that Wednesday’s protest was illegal and affected “the achievements of the anti-Covid-19 measures, which directly impacts the economic stability of the country, which is already in a fragile state”.

Footage on social media sites showed riot police entering the protest area at about 5am on Thursday and pressuring demonstrators to disperse.

Thailand’s youthful protesters began near-daily demonstrations in July and are demanding Mr Prayuth’s resignation, the writing of a new constitution and limits on the monarchy’s powers and wealth.

The protests have been peaceful but on Tuesday there were scuffles when Thai authorities broke up a demonstration and arrested participants near where the royal motorcade was due to pass.

On Wednesday, large numbers of young men with crew cuts and yellow shirts, who were accused by protesters of being policemen, gathered near the site where demonstrators were rallying, signalling a show of force by the regime against the three-month-old protest movement.

Bangkok police said that gatherings of five or more people had been banned and warned people not to organise further protests. Ford Tattep, one of the protest leaders said in a tweet that the situation was “almost the same as a coup”.

On Thursday afternoon about 2,000 protesters gathered at Ratchaprasong, one of Bangkok’s busiest intersections, defying the prime minister’s order not to gather as they chanted “Free our friends” before sitting down on the road. – Copyright The Financial Times Limited 2020