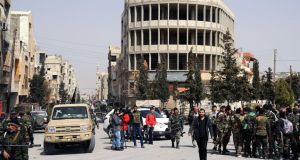 
The Syrian army, bolstered by fighters from Lebanon’s Hizbullah movement, yesterday captured the insurgent stronghold of Yabroud, dealing the opposition a major strategic and psychological blow in the battle for the Damascus region.

Engineers defused booby traps and unexploded munitions as troops fanned out in search of lingering insurgents from al-Qaeda’s Syrian offshoot, Jabhat al-Nusra, who fled across the nearby border into Lebanon where as many as 15,000 have sought sanctuary over the past two months.

The army announced it has “returned security and stability to the town . . . and its surroundings in northern Damascus province”.

On the strategic plane, the army can now close a main smuggling route for fighters and arms into Syria from Lebanon and open the Damascus-Homs-Aleppo highway and the road to the Mediterranean coast.

The fall of Yabroud, a rebel stronghold since early 2011, and nearby villages marks the end of a protracted campaign waged by the army and increases pressure on the Lebanese authorities to oust insurgents from bases in the pro-opposition Lebanese Sunni border town of Arsal, which hosts more than 50,000 refugees, mainly from the Qalamoun region.


Turning point
On the psychological plane, the capture of Yabroud can be compared to the conquest in June of the Syrian border town of Qusair, an event seen as a turning point in the conflict. Since then, government forces have gradually retaken many of Damascus’ suburbs and satellite towns, secured most of Homs, and advanced on insurgent-held quarters of Aleppo.

The Syrian air force conducted 20 air raids between Yabroud and Arsal and on the outskirts of Arsal after hundreds of insurgents poured into the area.

At least two fighters were killed and a dozen wounded. The Lebanese army closed the roads to the west of Arsal to prevent insurgents from attacking Shia villages in the neighbourhood.

Reacting to the loss of Yabroud, al-Qaeda offshoot Islamic State of Iraq and Syria fired rockets at two pro-Hizbullah Lebanese Shia villages, Labweh and Nabi Othman, in the Bekaa valley, killing one person and wounding three.


Peace talks
Meanwhile, UN mediator Lakhdar Brahimi began a three-day visit to Tehran where he is to meet president Hassan Rouhani and foreign minister Mohamed Javad Zarif with the aim of encouraging Tehran to urge Damascus to resume peace talks.

Syria’s main regional ally, Iran stands accused of providing financial and military support to the government although Tehran insists that it supplies only humanitarian aid.

As two rounds of talks, held in Geneva in January and February, made no progress, UN secretary general Ban Ki-Moon has called on the sponsors of the peace process, the US and Russia, to convene a new round and exert pressure on the two sides to engage in fruitful dialogue.