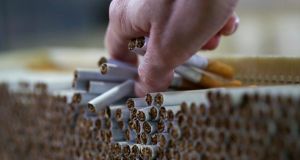 Tobacco consumption in Australia is at its lowest since statistics were first gathered in 1959. Photograph: Chris Ratcliffe/Bloomberg

Rupert Murdoch-owned newspaper the Australian has declared in a front page “exclusive” that plain packaging for cigarettes has failed because sales have gone up.

It was a great scoop. Except it isn’t true.

In fact tobacco consumption in Australia is at its lowest since statistics were first gathered in 1959. Stephen Koukoulas, a former economic adviser to Julia Gillard, the Labor prime minister who introduced the world’s first plain packaging laws in December 2012, says the figures used in the article looked wrong.

“The Australian said the consumption of tobacco had gone up according to confidential industry research. I’m an economist who has looked at data up and down and back and forth for many decades and I thought, ‘That doesn’t sound right’,” he told The Irish Times.

“So I looked at the data in the Australian Bureau of Statistics national accounts, and found the volume of tobacco consumed is falling. The figures show that total consumption of tobacco and cigarettes in the March quarter of 2014 is the lowest ever recorded. This is extraordinary. It is a Great Depression for tobacco sales.”

The Australian’s article also referred to “Labor’s nanny state”, which Koukoulas says is par for the course.

“Their agenda on many fronts is to bash Labor . . . There is also some discussion the coalition wants to repeal the plain packaging laws, so maybe this is part of the softening up,” he said.

“Every bit of the report is dodgy, from the way it was set up, to what’s in it, to the lack of analysis,” he said.

Prof Daube says the ultimate goal for cigarette manufacturers is for overseas media to pick up on negative stories in Australia. “The tobacco companies want stories . . . that will say plain packaging hasn’t helped in Australia. That’s the main game for them at the moment.”

In the UK, the Times, Spectator and Telegraph newspapers picked up on the story and all used the word “backfired” which was in the original Australian report.

Koukoulas warns that tobacco companies will use the same tactics in Ireland. “The consumption of cigarettes has been declining for many, many years as people give up smoking, or smoke less because the price signals are working, so I think the onus will be on those advocating plain packaging in Ireland to look at the data . . . and hold people to account”

Dr Tom Moore, an Irish GP based in Queensland’s capital Brisbane, backs the introduction plain packs in Ireland. “It seems to work in Australia,” he says. “It is very hard to stop smoking. Plain packaging is the way forward.”