Should Apple customers be worried by FBI’s unlocking of iPhone? 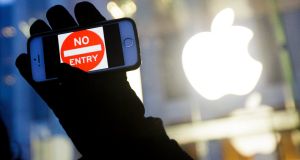 An iPhone is held up at a rally in February in front of an Apple store in New York in support of the company’s privacy policy. Photograph: Justin Lane/EPA.

Hostilities in the phoney war have temporarily ceased. But the question now is should the average consumer be worried about the security of the data on their iPhone?

On the face of it, it seems not. Security consultant Brian Honan of BH Consulting said the news that the FBI has managed to unlock the iPhone of San Bernardino gunman Syed Rizwan Farook without Apple’s help was a significant development.

If the FBI and its unnamed helpers could gain access to the phone, albeit an older model running an earlier version of the software, there was the potential for others to follow suit, he said.

“That’s the issue here. Apple said no because it would set a precedent and mean potentially all phones of this model would be at risk,” he explained.

But the access the FBI had to the phone implies that, whatever the method employed, having physical possession of the phone was a must. Later versions of the iPhone use different security features, Mr Honan said, which could mean that the methods used by the FBI to crack the San Bernardino phone may not work on new iPhones.

For ordinary consumers worrying about criminals accessing their phone, Mr Honan doesn’t see a major risk. Apple said it would continue to increase the security on its devices as threats and attacks on data become more frequent and more sophisticated.

While Apple’s position is admirable – and to be expected, given the public outcry against companies viewed as co-operating a little too readily with government security agencies in a post-Snowden age – users also need to take personal responsibility for phone security, from installing critical software updates to practising good security habits and potentially looking to third-party tools to protect themselves further.

But it’s worth remembering that security software, even encryption, isn’t infallible.

“There’s no such thing as absolute security,” said Mr Honan. “All protections will eventually be circumvented as technology improves. They’re never going to last forever.”