Authorities in Australia have issued a total fire ban as parts of the country, including Sydney, sweltered through the hottest November night on record. Video: Reuters 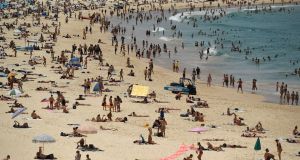 Parts of Australia, including Sydney, sweltered through the hottest November night on record, with temperatures likely to stay high on Sunday, prompting authorities to issue a total fire ban.

Temperatures are expected to cross 40 degrees for a second straight day on Sunday while the Bureau of Meteorology has predicted a five- or six-day heatwave for parts of northern New South Wales and southeast Queensland.

Australia has been experiencing hotter and longer summers, with last season dubbed “Black Summer” by prime minister Scott Morrison due to unusually prolonged and intense bushfires that burned nearly 12 million hectares and killed 33 people and an estimated one billion animals.

The Rural Fire Service issued a total fire ban for most of eastern and northeastern New South Wales for Sunday, saying there was a “very high to severe fire danger forecast” as hot, gusty winds exacerbate dry conditions.