Foreign journalists cannot go out alone in Xinjiang, despite its status as ‘China’s safest province’ 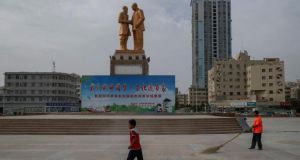 Visiting Urumqi recently, the capital of the northwestern Chinese province of Xinjiang, you somehow had the feeling you were never alone. Whenever I left the hotel for a wander I was always sure to have company in the form of a couple of none-too-subtle plainclothes police.

Going for a walk in a park, or finding a spot for a quiet beer, or on the hunt for some late-night cumin and garlic sprinkled lamb skewers sold on the streets – the trusty tail was sure to be there. At one point I jumped in a taxi and left my new-found friends behind, only to find two new ones waiting for me when I got to the destination. Getting out of the taxi I gave the embarrassed driver a questioning look and he mumbled that he had to text in details whenever he had a foreign fare.

I had a quick chat with my new chaperones and invited them to join me for a bite. They couldn’t partake but didn’t mind waiting and, besides, they appreciated the overtime, they said.

Other foreign journalists had similar experiences of being perpetually followed, day and night – so why all the edginess? What could it be that concerns them in Xinjiang so much about our rambles?

Officials say it is to ensure our safety, which is odd as the same officials like to proudly claim: “China is the safest country in the world and Xinjiang is the safest province in China.”

While Han Chinese make up 94 per cent of the country, in this province of 22 million they account for only about 40 per cent, with the Uighur Muslims the majority at 46 per cent. Though it is officially known as the Xinjiang Uighur Autonomous Region, many Uighurs now say the “autonomy” is largely nominal and their religion, culture, language and family structures are being intentionally eroded in a massive social re-engineering project aimed at assimilating them into the Han Chinese world.

Not that anyone would be foolish enough to strike up a political conversation anyway. Xinjiang is a world leader in high-tech surveillance – a populace under the ever-watchful eye of a pervasive system that utilises a plethora of digital techniques to keep detailed tabs and extensive databases that can and will be held against you.

The province’s geography explains its multiculturalism, and perhaps some of its tensions too. Standing at the centre of the historical Silk Road, Xinjiang is four times the size of Germany and borders no fewer than eight countries: Afghanistan, India, Kazakhstan, Kyrgyzstan, Mongolia, Pakistan, Russia and Tajikistan.

Over the centuries a variety of forces have vied for its control, and the region has had intermittent periods of autonomy, but Xinjiang (which means New Frontier) came under Beijing’s control during the Qing dynasty in 1884. The Uighur language is related to Turkish and the people tend to align themselves more with the central Asian peoples and cultures than Han Chinese.

Ethnic tensions have been stoked in recent years as Uighurs claim the ever-growing number of Han in the province are monopolising the economy and entirely dominating the politics, while their religion, language and culture are being sidelined in Beijing’s drive to modernisation.

We were in Xinjiang on a government arranged tour to see development projects on “The Silk Road Economic Belt”, which included visits to gleaming factories and hospitals, newly-built villages for relocated farmers and cultural centres, as well as two visits to the deeply controversial vocational-educational centres where up to 1.5 million Uighurs and other Muslim minorities have been placed to date.

To underline the counter terrorism challenges, officials first brought us to a gory exhibition that documented in bloody detail the terrorist attacks and race riots that have taken place in Xinjiang over the past two decades.

In an event that sent shockwaves through the Chinese system, mass riots in Urumqi in 2009 between Uighurs and Han left 200 dead. That put the province on extra-high alert and in 2013 the East Turkestan Islamic Movement, a group calling for Xinjiang’s independence, claimed responsibility for a car crash attack into Tiananmen Square in Beijing that left five people dead; and a year later for a knife attack in Kunming train station in which 31 were killed.

In the aftermath of those attacks Beijing launched the “strike hard” campaign to tackle Islamist separatist violence, but its actions also led to unprecedented restrictions on the wider Uighur community.

While the government for a long time denied the vocational-educational camps existed, it recently changed tack and opened the doors to some of them, saying they were educational centres that also played a role in their counter-terror work, and where trainees attended “voluntarily”.

According to a range of independent research, it appears Beijing is aiming to radically transform the fibre of Xinjiang using the deep pockets of the central poverty alleviation campaign – an ambitious campaign started in 2015 to eliminate absolute poverty in China by the end of next year – and the global investment Belt and Road Initiative.

At the heart of the heftily funded schemes is the vocational-educational centres, where more than 10 per cent of the Uighur population of about 11.5 million have been placed. While officials say trainees are there voluntarily, the testimonies from many people who were in these camps, or had relatives or friends in them, said they were given an offer they couldn’t refuse – it was the camp or jail, in many cases. Under a rigid quota system seen in publicly-accessible government documents, counties are given a target number of trainees they need to put into the system.

The objective in the camps is primarily to re-educate the recruits and attempt to cleanse them of any religious extremism or terrorist thoughts they might have, and secondly to teach them the Chinese language – which most Uighurs do not speak well, if at all – as well as the laws and regulations of China and a trade of some kind.

As a second phase the state aims to place adults in monitored employment, mostly in factories. Government documents say the transformation of farm workers to wage labour should not only involve the acquisition of new skills, but also a thorough identity and worldview change in line with Communist Party ideology.

And a third key element of the scheme involves putting children from a young age into state-run schools, a long-term strategy aimed at weakening the cultural, religious and linguistic links between parents and the younger generation, the government documents say.

The factories and the schools are Chinese-speaking environments where the Uighur language is prohibited, they do not permit religious practice and they carry the same re-education messages as the camps. People who resist taking the offered factory jobs or sending their children to these schools would be considered suspicious, and might well end up back in a camp.

On our official tour we were brought to countless gatherings where Uighurs and other minorities in full traditional garb sang and danced their hearts out – loud proof, the government says, that minority culture is alive and kicking. Critics dismiss this as window dressing and say we are witnessing a systematic dismantling of key elements of a culture. As examples of the religious crackdown alone, they point to the flattened mosques, and the fact that long beards and veils have been banned.

Dangling the carrot of improved education, home subsidies and economic growth, while wielding the stick of a state-of-the-art surveillance state equipped with re-education camps and a harsh penal system, China hopes to build a new peaceful, prosperous and largely secular Xinjiang.

That strategy could work, but considering the alienation that often shows its shaved face there has to also be a fair chance it might backfire regardless of the opponent’s might.

Could the policy ultimately turn even moderate Uighurs into extremists? The squeeze then, presumably, just gets tighter and tighter.

How tight can things go? It appears the edginess – and the overtime – will continue for some time to come.