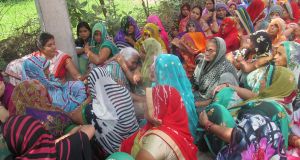 Relatives of Indian journalist Sandeep Sharma grieving on March 26th after he was fatally hit by a speeding truck in Bhind in Madhya Pradesh state, India. Photograph: Getty Images

The Editors Guild of India has demanded strict action in investigating the deaths of three journalists in what their families and human rights activists allege were deliberate killings engineered by the state.

It called upon the authorities inquiring into the deaths last month of reporters Sandeep Sharma in central India’s Madhya Pradesh state and Navin Nischal and Vijay Singh in eastern Bihar province to ensure speedy justice and to punish the culprits.

The guild has also expressed concern over the safety of Indian journalists who exposed links between criminal syndicates and the government, claiming that they were deliberately targeted as a consequence of their work.

All three reporters, who were run over by speeding vehicles, were investigating allegations of corruption and wrongdoing by local officials. Activists claimed the deaths underlined India’s standing as one of the world’s most dangerous places to be a journalist.

“Journalists in India today face life-threatening challenges in their work environment,” said Seema Mustafa of the centre for policy analysis in New Delhi.

She said the environment for journalists had worsened since prime minister Narendra Modi’s Hindu nationalist Bharatiya Janata Party (BJP)-led government assumed office in May 2014, as it was intolerant of critical reporting.

The New York-based Committee to Protect Journalists (CPJ) concurs, and has ranked India as the 13th most dangerous country in the world for journalists, behind other restive countries such as Afghanistan, Bangladesh and Pakistan.

India also scores low in the CPJs “global impunity” index of countries where the murderers of journalists are least likely to be punished.

In its report last year the CPJ said 27 journalists had been killed with “complete immunity” in India since 1992; it listed another 25 murders it was inquiring into to determine a connection to the journalists’ work.

Sharma was a reporter for the News World television news channel. The 35-year-old had received threats after conducting a sting operation last July that exposed a police officer agreeing to allow illegal sand-mining in a protected crocodile sanctuary in Madhya Pradesh state in exchange for a monthly payment amounting to just over €300.

Footage of his death recorded on CCTV showed how his scooter disappeared under the wheels of a speeding truck in Bhind district, 480km north of Madhya Pradesh’s capital Bhopal.

Over years sand has become a precious commodity to support the building boom across India, and its mining has increasingly been linked to corruption and violence. Unscrupulous developers resort to dubious means in connivance with state officials to mine sand, often dredging rivers and lakes that become dry as a consequence.

The Paris-based NGO Reporters Without Borders has said journalists who reported on India’s “sand mafia” were frequent victims of violence. The group ranks India as the 136th out of 180 countries in its world press freedom ratings.

The day before Sharma died, Nischal and Sing, who were travelling on a motorcycle in Bihar’s Bhojpur district, were hit by a sports utility vehicle and killed instantly.

The SUV was reportedly being driven by a local politician, whose activities were being investigated by the reporters for their local Dainik Bhaskar newspaper, published in Hindi.

Arrests have been made in both cases, but activists believe this was a token response and expect little or nothing to emerge.

“The local administration and police are usually complicit in such cases, and unlikely to pursue investigation seriously, ” said Mustafa. Like numerous other similar cases, the deaths of these three reporterswould also remain unsolved, she added.

Last September, editor and journalist Gauri Lankesh, who exposed the disruptive activities of Hindu fundamentalist organisations, was shot dead outside her home in Bengaluru (formerly Bangalore) in an incident that shocked the country. Last month police arrested a man reportedly with close links to a Hindu activist group, but charges against him have still not been filed.