Many of the deceased hit by collapsing walls, trees in north and west of country 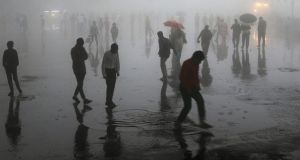 People walking under heavy rainfall and dust in the northern town of Shimla in Himachal Pradesh state, India on Wednesday. Photograph: AFP/Getty Images.

Dozens of people have been killed after a powerful dust storm and rain swept across parts of north and western India.

At least 77 people have been reported dead and more than 140 injured as the weather event casued houses to collapse and toppled trees.

The impact was particularly severe in Agra, the northern city where the Taj Mahal is located, according to officials.

Dust storms, a meteorological event in which sand and dirt are swept up into the air by strong winds, are common in the affected parts of India during warm and dry periods but the loss of life on such a scale in not common.

The Press Trust of India news agency said at least 27 others had died and another 100 were injured in the western Indian state of Rajasthan.

The rainstorm caught people by surprise as the monsoon season is still more than six weeks away.

Electricity supply and telephone lines were snapped in parts of Uttar Pradesh state, he added. - PA