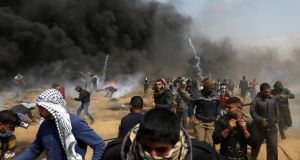 Palestinian demonstrators run for cover during clashes with Israeli troops at a protest demanding the right to return to their homeland, at the Israel-Gaza border in the southern Gaza Strip. Photograph: Ibraheem Abu Mustafa/Reuters

After five weekends of bloody clashes on the Gaza border, Israel’s high court on Monday considered a number of petitions filed by human rights groups aimed at forcing the army to reconsider its use of live fire to quell the protests.

A total of 44 protesters have been killed and thousands wounded, many by live fire, in the March of Return protests, which are expected to peak in mid-May, when the Palestinians mark the 70th anniversary of the founding of the state of Israel, which they regard as the Nakba, or catastrophe, and the birth of the Palestinian refugee problem.

One of the judges said no other court in the world would address the question of rules of engagement during a conflict but no decision was taken on Monday and the court will reconvene before the judges make their decision.

The petitions, filed by six human rights groups, demanded that the court revoke the army’s rules of engagement that authorise soldiers to use live fire on demonstrators along the Gaza border who are not endangering human lives.

The groups taking the case included the Association for Civil Rights in Israel, Yesh Din, Gisha and Hamoked: Centre for the Defence of the Individual.

The petitioners claimed demonstrations in Gaza were not prohibited and that if incidents turned violent or there were attempts to breach the border, these were civil disturbances and therefore it was legally permissible to open fire only when there was an immediate danger to human life.

The petitioners further claimed that even if the area was considered a combat zone due to the conflict between Israel and Hamas, the demonstrations themselves were not part of the fighting and the rules of war did not apply to them.

The state claimed that the security forces’ rules of engagement along the border corresponded with Israeli and international law, arguing that the legal basis for the petitions was “faulty and deficient”.

“The petitioners have drawn incorrect legal conclusions, first and foremost regarding the classification of the events as ostensibly ‘quintessentially civil incidents’. A proper reality check shows that these are events that compose part of the armed conflict between the Hamas terror organisation and Israel, with all that this entails,” it said.

Amnesty International has called for an arms embargo against Israel, which it accused of carrying out a “murderous assault” on Palestinians participating in the protests.

“For four weeks the world has watched in horror as Israeli snipers and other soldiers, armed with full protective gear and behind the border fence, attack Palestinian demonstrators with live ammunition and tear gas,” Amnesty’s Middle East and North Africa deputy director Magdalena Mughrabi said. “Despite international condemnation, the Israeli army has not retracted its illegal orders to shoot unarmed demonstrators.”

A senior Israeli officer told the Ha’aretz newspaper that most of the army’s killings of Palestinians during the Gaza-border protests resulted from snipers aiming at demonstrators’ legs, with the killings an unintentional outcome after a protester bent down, a sniper missed or a bullet ricocheted.