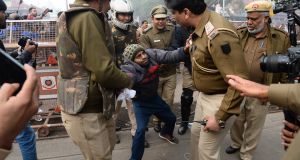 Thousands took to the streets in India on Wednesday against a new citizenship law based on religion that has touched off violent unrest. Photograph: Sajjad Hussain/ AFP/Getty Images)

India’s federal capital New Delhi and numerous other cities across the country were gridlocked on Thursday as demonstrations continued unabated against the controversial Citizenship Amendment Act (CAA) that protesters claim is blatantly sectarian.

Police also opened fire on demonstrators in Bangalore, used water canons and burst tear gas shells in at least 11 other cities, including Mumbai, nearby Ahmedabad and Hyderabad, for defying a restrictive colonial-era statute that prohibits the public gathering of more than four persons.

The protesters were opposing the CAA that was enacted last week by prime minister Narendra Modi’s Hindu nationalist Bharatiya Janata Party (BJP) and offers Indian citizenship to illegal non-Muslim immigrants such as Hindus, Sikhs and Christians from the Islamic states of Afghanistan, Bangladesh and Pakistan.

Many of them interviewed by television news channels declared that the CAA was overtly advancing the BJP’s agenda of imposing Hindutva or Hindu hegemony upon India, which has long celebrated multi-religious diversity.

They also said the Act was against the country’s secular constitution, which stipulates that religion should not be made a condition for citizenship.

“The BJP is bent on turning India into a Hindu theocratic state,” said Marxist Party leader Brinda Karat. She said the BJP could not silence the voice of the people.

Mamta Banerjee, the fiery chief minister of eastern Bengal state, also came out strongly against the CAA. “They will have to implement the CAA over my dead body,” she said at a public rally in the state capital Kolkata (formerly Calcutta) on Wednesday.

Other demonstrators said that the BJP administration had employed the CAA as a “diversionary tactic” to deflect attention from the economy that was swiftly spiralling downwards.

But Mr Modi and federal home minister Amit Shah, who piloted the Act through both houses of parliament, were unrelenting, insisting the statute was not discriminatory and would neither be retracted nor altered.

Mr Modi also blamed the opposition parties earlier this week for spreading lies and rumours about the Act and creating an atmosphere of “illusion and falsehood” to mislead the public.

Meanwhile, the authorities suspended internet and mobile telephone services in parts of Delhi for several hours on Thursday and shut down some 20 metro stations in a bid to restore order. They also detained hundreds of protesters, but released them after a few hours.

Lawyer and civil rights activist Prashant Bhushan said the government was trying to stop people gathering by disrupting mobile phone services. “It’s a shame that this government is scared of its own people,” he said.

More than 20 domestic flights to the capital were cancelled because of the demonstrations and traffic piled up for hours at police barriers erected at all entry points into Delhi from neighbouring states, throwing life across the city into chaos.

The protests turned violent in the northern city of Lucknow, capital of India’s most populous Uttar Pradesh state, as demonstrators attacked and burnt a media van and an empty bus and clashed with police who burst tear gas shells and conducted baton charges in retaliation.

In Bangalore, police took away Ramchandra Guha, a renowned Indian historian, in the midst of him being interviewed by a television news channel.

One of the police officers who detained him was caught on camera threatening to hit Mr Guha who has virulently opposed the CAA in his writings and interviews, if he defied arrest and continued to speak to the television channel.

Protests against the CAA have also erupted on several university campuses around the world including Oxford, Harvard, Yale and MIT.