Philippines leader Duterte under pressure over own drug use 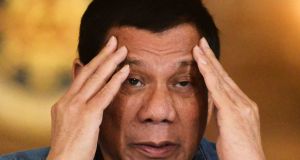 Philippines president Rodrigo Duterte, whose campaign against illegal narcotics has seen more than 7,000 people killed, is under pressure over his use of a powerful drug whose effects he has compared to “being on cloud nine”.

Despite taking a zero-tolerance approach to drugs and giving police death squads a free hand to kill suspected dealers and users, Mr Duterte (71) has been widely questioned about whether his abuse of the pain relief drug fentanyl following a motorcycle accident three years ago constitutes an addiction.

Known as “The Punisher” for his brutal crackdown on the narcotics trade in the Philippines, Mr Duterte denies he is addicted to fentanyl, a painkiller many times stronger than heroin or morphine which is often prescribed for cancer pain and other serious ailments.

An overdose of the opioid fentanyl is widely believed to have killed the pop star Prince, and the medication is in the same class of drugs as Oxycontin and Vicodin.

Mr Duterte was prescribed fentanyl after he suffered a severe spinal injury when injured in a motorcycle accident three years ago, when he was 68 years old. He has sought to play down the impact of fentanyl.

“I am perpetually in pain,” he said in remarks carried by the ABS-CBN network.

Mr Duterte has described how, when prescribed fentanyl, he had used a whole patch at a time instead of cutting it into four pieces as recommended.

“There was a time that I used the whole thing because, more than just the disappearance of pain, you feel that you are on cloud nine, as if everything is okay with the world, nothing to worry about,” he said.

At one point, Mr Duterte said he was joking about taking fentanyl: “Fools, I just made up that story and you believed it.”

However, speculation about his health, including rumours that he has cancer, has persisted.

His ally in Congress, Carlos Zarate, said it would be better for Mr Duterte to end the speculation by releasing his medical records.

Asked by the BBC how he could be waging a war on drugs when he himself was “highly dependent on drugs”, Mr Duterte responded: “I’m not an addict. Only when it is prescribed. Addiction is only with regularity, my friend.”

However, he said he had changed his approach and learned to bear the pain. A few minutes of sleep helped to bring down the scale of the pain, and it almost disappeared, he said, when he saw a beautiful woman.

Mr Duterte’s anti-drugs campaign has been criticised by the West and by human rights groups.

Although estimates vary, more than 7,000 people are thought to have died in drug war-related incidents since the campaign began in July last year. Police say more than 2,500 were drug suspects killed in legitimate police operations, and more than 3,600 are “under investigation”.

His political opponent senator Leila de Lima, who says she is expecting to be arrested any day now, has called for him to release details of his health condition and said his drug use had driven him to “madness”.

“Duterte should stop taking fentanyl because obviously it has already driven him to madness and to fits of paranoia where everyone he sees is either a drug addict or a drug lord,” she said.

“Mr President, stop abusing drugs so for even one single second you can experience a lucid interval and discover how crazy this drug war witch-hunting has become,” said Ms de Lima.