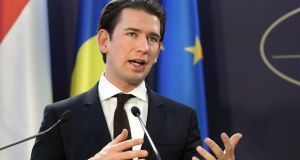 Austrian chancellor Sebastian Kurz: ‘In addition to the European plan ... we will take a national step.’ File photogragh: Robert Ghement/EPA

Having failed to broker a deal on a digital tax during its European Union presidency, Austria said on Saturday it planned to introduce its own levy on tech companies including Facebook and Amazon while the bloc works on its plan.

Austria’s six-month tenure of the rotating EU presidency ends on Tuesday, when the role will pass to Romania.

At a meeting this month, EU finance ministers failed to agree a tax on digital revenues, despite a last-minute Franco-German plan to salvage the proposal. European Economic Affairs Commissioner Pierre Moscovici has since said the plan for an EU-wide tax remains on the table.

The European Commission had suggested a 3 per cent tax on the EU-based digital sales of multinational companies. Under the proposal, the tax would be payable where the user of the technology is based, rather than where the company’s headquarters is located.

Ireland has consistently opposed this approach as it could result in a significant loss of tax revenues. The proposal was blocked at a meeting of EU ambassadors in November.

“In addition to the European plan ... we will take a national step. We will introduce a digital tax in Austria,” Austrian chancellor Sebastian Kurz said in a statement.

“The aim is clear: taxation of companies that make large profits online but barely pay taxes – such as Facebook and Amazon,” he added, without elaborating.

Finance minister Hartwig Loeger is working on the proposal, which will be part of a tax reform next year, the statement said. Details of the digital tax will be announced at a cabinet meeting on January 10th-11th.

Austria had previously said it would create a digital tax if the EU failed to introduce one of its own, but Mr Kurz’s statement stopped short of saying the EU plan was dead.

“A lot of progress was made at the European level [during Austria’s presidency]. There is an agreement in principle that there should be an EU digital tax,” Mr Kurz said. – Reuters